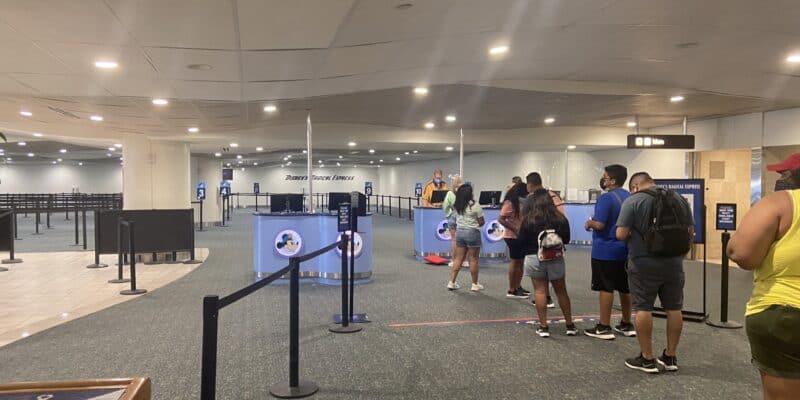 If you are planning to visit Walt Disney World in the near future and are set to use Disney’s Magical Express service, you will be happy to know you’ll more than likely be met with low crowds and wait times — meaning you will get to your destination before you know it!

However, if you plan to use Magical Express, you only have until the end of the year to do so as Disney announced the service will be coming to an end at the start of 2022.

In case you weren’t aware, Disney’s Magical Express, despite being one of the best parts when arriving at Orlando International Airport, is coming to an end. The complementary mode of transportation brought magic to Guests before they even arrived at Walt Disney World property; however, this service will no longer be offered at the start of 2022. Per Disney:

Earlier this year, we reported on long wait times and crowds at Magical Express in Orlando International Airport just shortly after Disney announced the service was ending. Now, however, it seems that crowds are disappearing as we approach the end of Magical Express.

Last week, we reported on low wait times and crowds inside Orlando International Airport. In fact, Guests were saying that they arrived at their destination within an hour of arriving at Magical Express! Now, I can confirm this to be true as I just utilized Disney’s Magical Express myself and found minimal crowds and low wait times.

When I arrived at Magical Express at approximately 8:30 a.m. on Monday, Augus 30, there were about four groups in front of me; however, there was only one Cast Member working. Because of this the line did build up a bit behind me, but even so, there were only approximately 15 groups total in line by the time it was my turn.

After I checked in, I noticed none of the Resort lines had Guests waiting in them, which was a great sign. I went into my line and a Cast Member attended to me almot immediately.

There is still time to utilize Disney’s Magical Express before it comes to an end in January 2022, especially if you plan to visit Walt Disney World later this year for the 50th anniversary, which will kick off on October 1.

At this time, Disney has not announced a complimentary replacement for Magical Express, but Inside the Magic will update you as we get information.