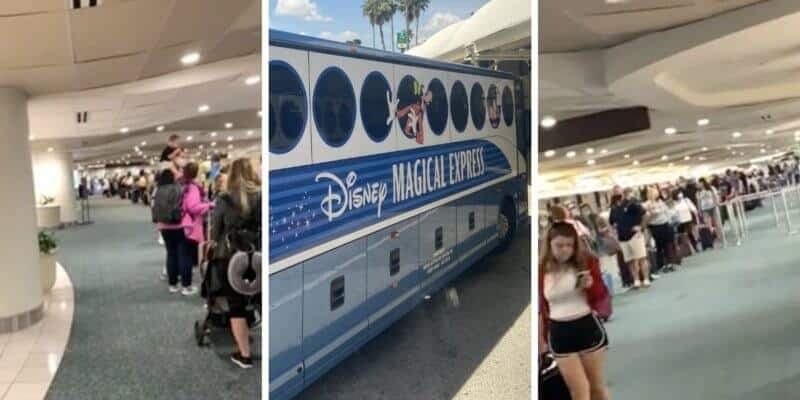 Disney’s Magical Express is one of the most magical parts when arriving at Orlando International Airport. The complementary mode of transportation brings magic to Guests before they even arrive at Walt Disney World property.

Unfortunately, it wasn’t long ago that Walt Disney World confirmed this service would be coming to an end in 2022. However, it seems as though that isn’t stopping Guests from utilizing Magical Express for the time being.

In fact, during spring break we reported that those traveling to Walt Disney World from Orlando International airport may wait hours for a Magical Express bus. And it looks like that may be true once again as we approach summer.

One Disney fan, who goes by lunasgarden on Reddit, took to the platform to share a video of what the Magical Express line looked like when they traveled to Orlando International Airport recently. According to the comments section, this Reddit user shared that they waited at least two hours:

At least two hours! The cast member at the end of this line said it would be at least another 60 minutes before we got a bus. And we were the first in line for our hotel. The line for Pop Century was super long and would probably have taken twice as long to get through.

Another Reddit user commented that this has been happening frequently as of late and they decided to arrange for a car service to Walt Disney World instead of standing in a long line for Disney’s Magical Express:

I’ve seen it reported multiple times since reopening. I just arranged for a car service because I’m not wasting hours of my multiple times rescheduled trip waiting for a bus.

Something I hadn’t really seen reported before leaving: Magical Express lines are super long from WaltDisneyWorld

As we approach summer and as we continue to move forward amidst the ongoing pandemic, it seems as though Guests are flocking to the Most Magical Place on Earth. If you have an upcoming Disney World vacation, and plan to use Disney’s Magical Express, please continue to stay patient and plan accordingly.

Magical Express is a transportation service that brings Guests to and from their Resort hotel and Orlando International Airport. Again, it is important to keep in mind that Disney confirmed this service would be coming to an end in 2022.

The Walt Disney World website describes this service as:

Have you traveled to Disney World recently and used Magical Express? How long did you wait in line? Let us know in the comments below.