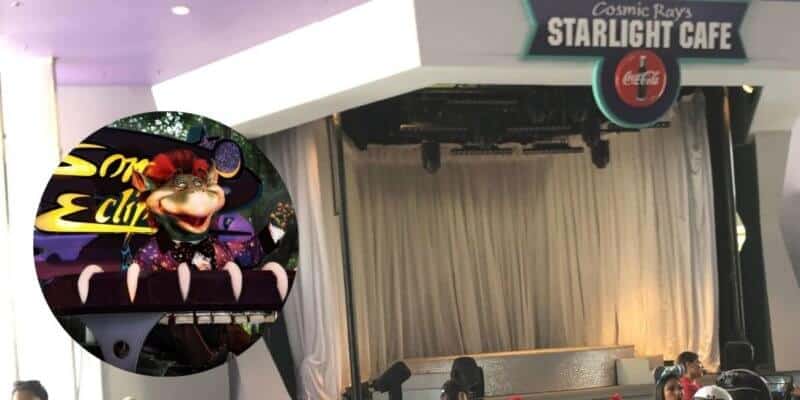 It appears that one fan-favorite character, who usually makes appearances on stage at Cosmic Ray’s Starlight Café, was actually missing yesterday!

Sonny Eclipse, who can be spotted inside the Quick-Service location in Tomorrowland, was MIA for quite some time yesterday. In case you aren’t familiar, Sonny Eclipse is an audio-animatronic singer who plays an “astro-organ” on the stage of Cosmic Ray’s Starlight Café in Magic Kingdom.

The “biggest little star in the galaxy” has been entertaining guests at Cosmic Ray’s Starlight Cafe in Tomorrowland at Magic Kingdom Park since 1995. Guests can catch his 27-minute set of tunes – and wisecracks – multiple times a day while they dine.

According to one Reddit user, Sonny Eclipse did not make any appearances yesterday and was missing from the stage while Guests piled in to enjoy a quick bite to eat.

SweetoNeato shared the following photo to Reddit along with the caption:

My favorite alien is MIA today

My favorite alien is MIA today from disneyparks

Another Reddit user, who goes by TigerStripes11, asked if SweetoNeato asked a Cast Member or anyone nearby why Sonny was missing, to which they said, “No, but I should have. I checked back a few hours later and he was still gone”.

The good news is that despite Sonny not putting on a show yesterday, it does appear that he is still inside the location as another Reddit user, who goes by AbeRumHamLincoln, commented:

He is actually there! He is above the stage. That stage actually lowers into the ground and sonny is on top.

The Reddit user also shared the following video from Mouse Hacking on YouTube, which shows Sonny raise up into the stage after an older performance:

At this time, we do not know why Sonny did not appear yesterday, but hopefully, we see the “biggest little star in the galaxy” return to the stage today!

Cosmic Ray’s Starlight Café is described by Disney as:

Explore a galaxy of enticing options from our out-of-this-world bacon cheeseburgers to chicken strips to plant-based burgers. Plus, have a blast enjoying the stellar musical entertainment of Sonny Eclipse!

Have you ever dined at Cosmic Ray’s Starlight Café? Have you ever caught a performance by Sonny Eclipse? Let us know in the comments below.