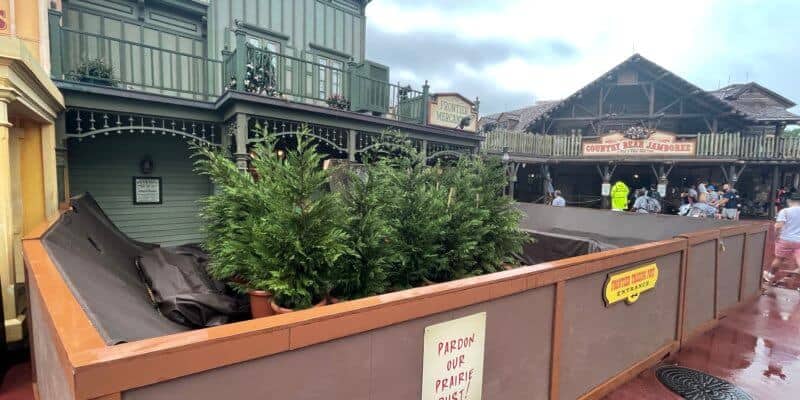 Disney World is constantly evolving its theme parks every day. From attraction refurbishments to new food options to updates within each land, there are tons of new details to explore each time. Guests visit.

Recently, we have seen Magic Kingdom undergo quite a bit of change, most of which are due to the 50th anniversary celebration overhauling Cinderella Castle, as well as Main Street, U.S.A. and Fantasyland. We last reported that Princess Fairytale Hall received a gold finish makeover with new 14 karat signage added to the location.

Although Disney has not announced any official changes coming to Frontierland, the land is currently receiving some refurbishment. The land has had some work being done to it over the past few days, closing off areas around the Frontierland Mercantile, Frontier Trading Post, and Peco’s Bill. The boardwalk which connects them all has been under construction.

Take a look at the photos below to see what updates are being done.

As an update, a tonne of trees and foliage fave been added to the front of Frontier Mercantile, perhaps to cover up some of the pixie dust, as noted by the signage on the construction walls.

The majority of this area is covered in brown tarp, which we do not see on the other stretch of construction within the land.

For now, it seems that the construction taking place in Frontierland is likely cosmetic, but stay tuned to Inside the Magic for all of your Disney World updates!

What aspect of Magic Kingdom do you think needs some sprucing up? Let us know in the comments below!

If you want to visit Walt Disney World on the 50th anniversary, you can! Click here and get started today, Mickey Mouse and Minnie Mouse are just a click away.