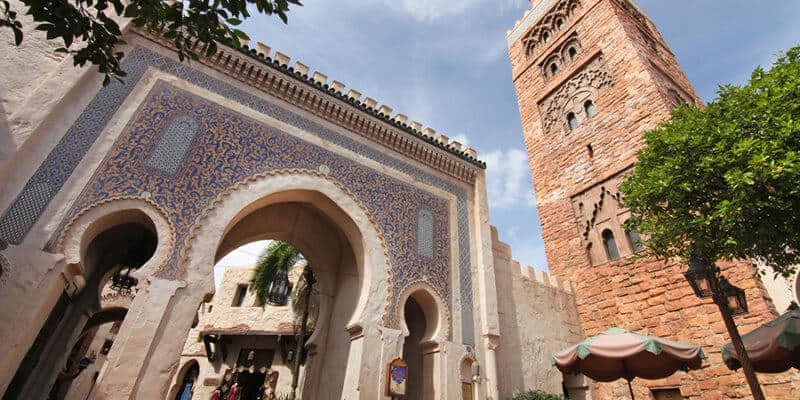 Ah, Salaam, and good evening to you worthy friend. Please, please, come closer… Too close, a little too close! Let’s gather together and explore the history and culture of the marvelous Morocco Pavilion at Walt Disney World’s EPCOT theme park.

From intricate details and authentic architecture to the modern takeover by Disney’s Imagineers, this middle eastern pavilion has a lot to offer. Our complete guide to EPCOT’s Morocco Pavilion will assist your visit!

History of the Morocco Pavilion

The Moroccan Pavilion is located in EPCOT’s World Showcase, between the Japan pavilion and the France pavilion, nearest to the International Gateway. The intricately designed area was one of the few pavilions in the World Showcase funded by the country it represents. Originally, when the area was being built, King Hassan II sent designers to help with construction. This Disney fun fact is sometimes forgotten by Disney guests!

The attention to detail by the Moroccan artisans was exquisite. The architects and tradespeople purposefully installed flawed mosaic tiles in the displays, which kept with the Muslim belief that only Allah can create perfection. See if you can spot these small differences when you view the mosaics!

Originally not included in the 1981 opening day lineup, Morocco was under construction, as seen in Disney’s aerial photo below.  Hustling along, this first new pavilion opened on September 7, 1984, and would feature restaurants, authentic architecture, and shopping.

Let’s eat! This World Showcase pavilion is also home to three restaurants – Restaurant Marrakesh, Spice Road Table, and the Tangerine Café. The restaurants offer popular dishes as well as a taste of Morocco.

When open, Restaurant Marrakesh is a table service restaurant offering Moroccan delicacies as roast lamb, shish-kebab, couscous, and brochette of chicken. Traditional belly dancers appear occasionally, sending your sense back to those of the Sultan’s palace. Disney tells us,

From the full bar, Guests 21 years of age and older can delight in such specialties as the Casablanca Sunset, the Sahara Splash and the Marrakesh Express.

For those looking for a quick-service eatery, the Tangerine Café offers shawarma platters, pastries, and falafel. During Festivals, you may find additional fare for tasting.

Lastly, Spice Road Table offers waterside seating for the spectaculars over World Showcase Lagoon. Reservations are recommended for those looking to enjoy the spicy shrimp, fried calamari, and naan spreads.

It must be mentioned that a fan favorite display was removed from the Morocco Pavilion recently. The backside of a chimney near Restaurant Marrakesh was deemed inappropriate by Disney for attracting the wrong kind of attention. The chimney was blocked off and changed in April 2021, which went hand in hand with Disney’s full control of the pavilion, taking it from the hands of the country it represents.

The chimney was converted into a false door, keeping the base shape and adding a blue wash wooden door. The changes kept with the architectural style of the pavilion.

Should you hear music coming from the pavilion, look for Musique Aramenco, which is a show combining traditional and modern music and accompanied by belly dancing. The 20-minute show (when running) repeats throughout the day. Check daily show times in the park.

Something to look for is the tower above the pavilion, called the Koutoubia Minaret. It’s an exact replica of the popular icon located at Koutoubia Mosque in Marrakech, the largest mosque in Morocco. In the late evening, as EPCOT’s firework spectaculars startup, you’ll notice that each country in the World Showcase lights up with rope lighting and brilliant bulbs. Each one, except Morocco. As the Koutoubia Minaret is a prayer tower, it would be a violation of customs to light a prayer tower at night, so it remains dark.

EPCOT has been under so much construction lately, leading up to its 39th birthday, with the addition of Ratatouille, the Skyliner incorporation on the backside of the park, the reimagining of Future World, and more. The new skyline of Morocco is quite different, but some old additions remain. For instance, have you ever look at Morocco from across World Showcase Lagoon and noticed the Tower of Terror looming in the background? It was painted specifically to match the Morocco pavilion, since it would be seen from this vantage point.

But now, the skyline of Morocco involves the “Go Away Green” shadow of the Ratatouille building and the cable system of the new transportation line, making the area look incredibly busy. The initial, careful blending of the Tower of Terror seems in direct contrast to the hasty, inconsiderate addition of these other elements. Twitter user @bioreconstruct has a look at the area from across the Lagoon. It’s worth noting that while you’re walking around in the pavilion these elements can hardly be seen because of the tall surrounding show buildings.

Characters to See at the Morocco Pavilion

Disney Guests can stop by the Morocco Pavilion to meet a few familiar Disney characters! Princess Jasmine of Agrabah stops by the Moroccan marketplace to greet fans, and oftentimes you may see Aladdin shopping with her!

On runDisney race days, Abu and Genie are known to be spotted at the pavilion as well, so if you’re racing by, try to stop for a photo and perhaps a wish or two!

What you may not see are characters from the movie Atlantis. While the movie itself takes place in the waters offshore of the southwest coast of Morocco, the film does have roots in this country. Perhaps one day we’ll see Milo and Kida walking around!

When you’ve passed through this exquisitely decorate pavilion in the World Showcase, be sure to stop by the other countries featured on the World tour. Nearby, you’ll find Japan, France, and across the International Gateway, the United Kingdom. Plan your trip around World Showcase with the help of an authorized Disney vacation planner at Academy Travel. They will be your tour guides to planning a perfectly passport-ed trip at no extra cost to you! Call them today at 609-978-0740.

What is your favorite part of the Morocco Pavilion? Leave us a comment below!