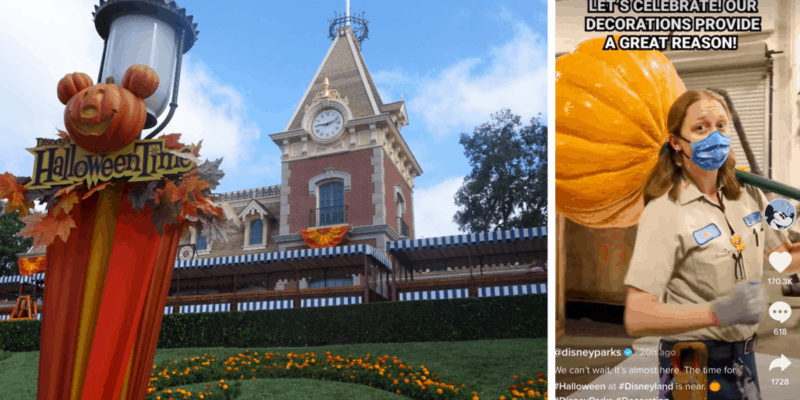 Halloween Time officially begins at Disneyland Resort this Friday, September 3, and spooky season preparations are in full swing! Here’s what’s new with Disneyland Halloween as of just a few days before the spooktacular time of year debuts for 2021.

This Friday, Guests of all ages will have the opportunity to enjoy the Halloween Time season at Disneyland Park, Disney California Adventure Park, and throughout the Downtown Disney District. Halloween decorations have already begun to go up at the theme parks — two major photo spots, the giant Mickey pumpkin in Town Square and the Oogie Boogie sign on the DCA gates, are already delighting Guests!

Although the Halloween festivities began at Walt Disney World Resort in Florida in early August, Disneyland Resort in California is always a little later to kick off the spooktacular time of year. But that isn’t stopping Disney from hyping up the happy haunts right here at The Happiest Place on Earth!

Of course, the official Disney Parks TikTok page has been bustling with activity to get Guests excited for the spooky season. Disney Parks already shared the following video of the giant Mickey pumpkin arriving in Town Square on Main Street, U.S.A. Fans lovingly call this sweet Mickey “Winky Blinky” or “Mickey Blinky,” and even though Halloween hasn’t officially begun, this Mickey jack-o-lantern is often a signal to fans that the spooks are upon us. It makes for a great photo opportunity!

And now, Disney Parks has posted another video. This time, Disneyland Resort Cast Members are sharing their excitement for transforming Disneyland, Disney California Adventure, and the Downtown Disney District. How adorable is this poem?

We can’t wait, it’s almost here. The time for #Halloween at #Disneyland is near. 🎃 #DisneyParks #Decoration #DisneyCastLife #PumpkinSeason #Poem

We can’t wait, it’s almost here. The time for #Halloween at #Disneyland is near. 🎃 #DisneyParks #Decoration #DisneyCastLife #PumpkinSeason #Poem

We can’t wait to visit Disneyland Park and Disney California Adventure Park this Friday for the start of Halloween Time! There is so much that the theme parks have in store. Click here to read more!

Are you planning to visit Disneyland Resort for Halloween Time, running from September 3 through October 31? Click here to book a trip!

Comments Off on Disney Hypes Up Halloween Season Starting THIS Friday!