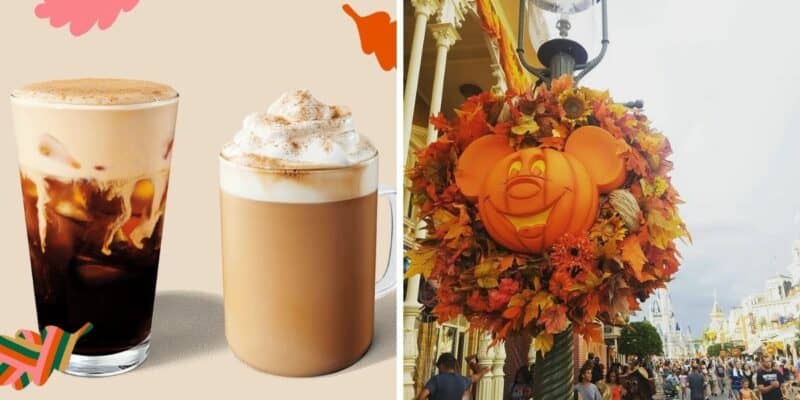 Starbucks began offering Pumpkin Spice Latte’s on its menu on August 24 this year, meaning it is officially PSL season! If you want to enjoy this iconic fall treat at Walt Disney World during your vacation here is where you can find one.

If you do not plan on entering the theme parks you can find two Starbucks locations at Disney Springs. There is no charge for entering Disney Springs, and you don’t even have to pay for parking!

The first Starbucks location is across from the Disney Style store, and the second location is adjacent to the World of Disney store. Essentially each location is on either end of Disney Springs making it very convenient to grab a PSL when you visit.

Related: The Ultimate Guide to Disney Drinks at Starbucks

Each and every Disney World theme park contains its own Starbucks location.  So no matter which park you visit you can enjoy a Pumpkin Spice Latte. Each location has a unique name that ties it into the theme of the park.

At Disney’s Animal Kingdom you will find Creature Comforts. Creature Comforts is located in Discovery Island. If you do not feel like a PSL you can also purchase a Flat White Latte that will support the Disney Conservation Fund in the effort to protect South African Monkeys! How awesome is that?

Related: This Secret Drink From Starbucks Is Inspired By Mrs. Potts

The Starbucks at Disney’s Hollywood Studios is called the Trolley Car Cafe. With its old Hollywood theming this is my personal favorite Starbucks location at Walt Disney World. The Trolley Car Cafe is conveniently located close to the entrance of the park making it the perfect place to grab a Pumpkin Spice Latte.

EPCOT is currently undergoing a lot of construction. The original Starbucks location has closed amid the construction, however, you can still find a Starbucks inside of EPCOT! Tucked away in EPCOT’s World Showcase you will find the Travelers Cafe which serves as the Starbucks for EPCOT.

The Starbucks inside of the Magic Kingdom is called the Main Street Bakery. It is of course located on Main Street, U.S.A. and serves up absolutely delicious Mickey-shaped cinnamon rolls. Be sure to grab a Mickey cinnamon roll to pair with your Pumpkin Spice Latte as they go perfectly together.

It is also worth noting that Disney World will offer plenty of fall treats around the parks and hotels so be on the lookout for treats while you enjoy your pumpkin spice latte.

Let us know your favorite place to pick up a Pumpkin Spice Latte at Disney World in the comments below!