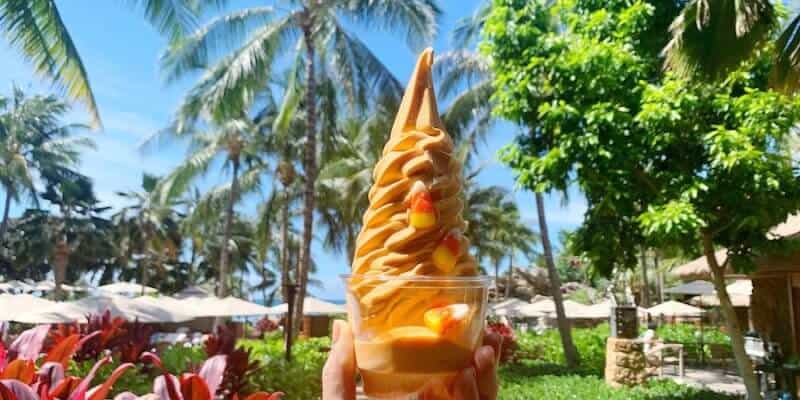 Today is Dole Whip Day! Did you know that Disney celebrates Dole Whip Day every July 19? And this year, Disney gave fans of this delectable, tangy treat, a special announcement to celebrate.

Disney announced that they would be bringing back the popular pumpkin spice Dole Whip once again this fall. Here are all the details, and where to find this unique Dole Whip.

Dole Whip is classically a pineapple soft serve. The treat has been extremely popular with Disney Parks fans who can enjoy a Dole Whip on a hot day and cool off. Since the popularity of the Dole Whip has grown, Disney has slowly introduced new and exciting flavors.

You may have tasted lime, mango, raspberry, or orange Dole Whip before, but what about pumpkin spice Dole Whip? Disney created this fall-inspired flavor exclusively for Aulani. It is a limited-time treat that comes back during the fall and can be found at Ulu Cafe in Aulani!

And today, Disney confirmed that this treat will be coming back this fall now that Aulani has reopened after its extended closure due to the pandemic.

At this time, this treat will not be offered anywhere except for the Ulu Cafe at Aulani. Hopefully, Disney will bring this to Walt Disney World and Disneyland in the future so that everyone can try this unique fall flavor.

You can find other flavors of Dole Whip at both Disneyland and Walt Disney World that are sure to satisfy your Dole Whip craving, even though they will not have this limited pumpkin spice flavor.

Have you ever tried pumpkin spice Dole Whip? Let us know how you liked it in the comments!

Do you want to book a Hawaiian vacation at Aulani? We can help! Click here for more information.