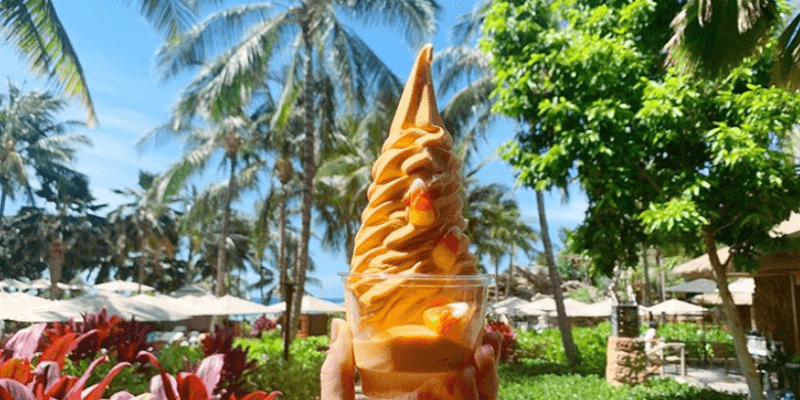 Hello, fall fanatics! The best season of the year is here: pumpkin spice season! And what better way to commemorate fall than with a delicious pumpkin spice Dole Whip at a Disney resort? Sounds great to us!

Yes, we love Mickey’s Not-So-Scary Halloween Party, Oogie Boogie Bash, all of the amazing pumpkins on Main Street, and the fall décor throughout the Disney Parks. But as lovers of both food and fall, we can’t get enough of Disney’s pumpkin spice treats! So when we found out that Disney had brought back its delicious pumpkin spice Dole Whip for the season, we knew we had to share the news.

This dessert has all the fall flavors mixed with the refreshing sensation of Dole Whip. It’s even topped with candy corn to make it extra appropriate for October!

They're back at #DisneyAulani ? Pumpkin Spice Dole Whip

Unfortunately, if you want to grab a bite of this delicious pumpkin spice Dole Whip, you’ll have to travel all the way to Aulani, A Disney Resort and Spa on the island of Oahu in Hawaii. As of right now, it’s not looking like this festive fall treat is making its way to Disneyland Resort or Walt Disney World Resort anytime soon.

So, does that mean it’s time to plan a trip to Hawaii this fall so we can get our hands on this amazing pumpkin spice deliciousness? Like Moana says, there’s just no telling how far we’ll go…for a Dole Whip!

Want to book a trip to Aulani A Disney Resort and Spa on the beautiful Hawaiian island of Oahu? Contact the Authorized Disney Vacation Planners at Academy Travel to make your Hawaii vacation dreams a reality! Picture yourself with a Dole Whip in one hand and a Mickey-shaped shave ice in the other, relaxing at perhaps the most beautiful Disney Resort in the world. It sounds like a magical dream come true to us! Click here for a free, no-obligation vacation quote.

What do you think of the seasonal pumpkin spice Dole Whip being served at Aulani in Hawaii? Should Disney bring this to Disneyland and Walt Disney World? Let us know in the comments!