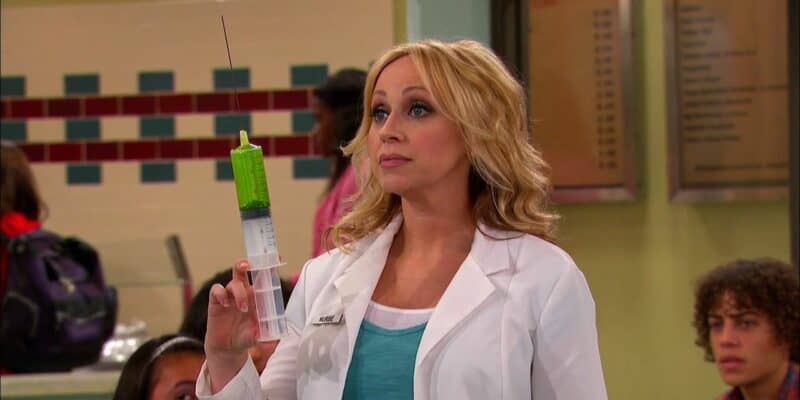 Lately, we have taken a look at how Disney stars growing up under the spotlight of the Disney Channel have been affected. However, there are also many adult actors who have had successful careers with Disney Channel.

Actress Leigh-Allyn Baker played Amy Duncan in the Disney Channel show Good Luck Charlie, which aired from 2010-2014. Currently, Baker voice can be heard as multiple characters in Mickey Mouse Mixed-Up Adventures. She has also done voice work for the Disney Channel animated series Star vs. the Forces of Evil and the Disney Junior series Jake and the Neverland Pirates.

The actress left her California life to move to Tennessee, where she has attended school board meetings, as she has school-aged children.

At the most recent Williamson County Board of Education meeting in Tennessee, the Disney actress went on an anti-mask rant that was caught on camera.

In the video, Baker said:

“My name is Leigh-Allyn Baker, and I’m a California refugee. I gave up everything there: a really successful Hollywood career, television shows. I gave it all up for freedom and to come to this friendly place in Tennessee and be greeted with open arms, and I love it here.”

Baker’s rant only ramped up from there.

“And still, I would never put them in a mask because their brain needs oxygen to grow, which the neurologists can confirm. Anyway, the real part of the clown show is that you all think that you actually have the authority to mandate this. Because there are these books that I have and I have them as a gift for you: the Constitution, the Declaration of Independence, the Bill of Rights, the Federalist Papers and also the Bible. These guarantee my freedom and yours and our children’s to breathe oxygen.”

The room roared with applause to Baker’s speech, as the Disney Channel actress seemingly had a majority of the crowd on her side. If you want to see a video of the speech — which has since caused the actress to go viral — Film Updates (@filmupdates) Tweeted it, which you can see below.

Leigh-Allyn Baker, known for playing Amy Duncan in #GoodLuckCharlie, speaks out against vaccine and mask mandates at a school board meeting.

Leigh-Allyn Baker, known for playing Amy Duncan in #GoodLuckCharlie, speaks out against vaccine and mask mandates at a school board meeting. pic.twitter.com/PKUttMqWj8

At both Walt Disney World Resort in Florida and Disneyland Resort in California, masks are currently required for all indoor locations, as well as on attractions, and in specific queues.

What do you think of Leigh-Allyn Baker’s speech and this situation? Let us know in the comments below.