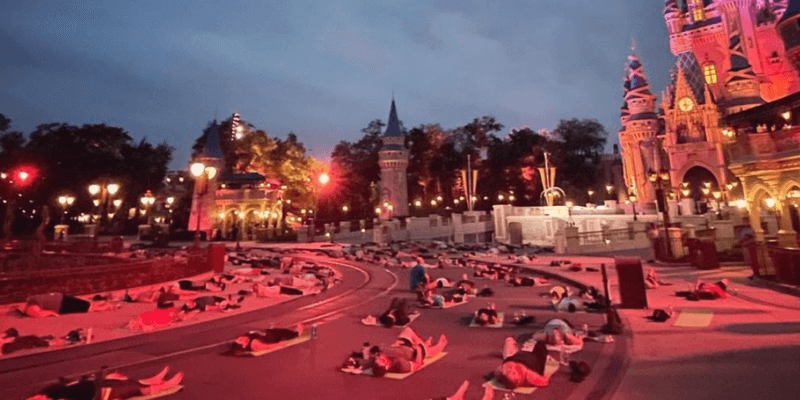 runDisney is BACK! The marathon running events have officially returned to Walt Disney World and they are bringing one awesome activity with them!

The Disney Princess Half Marathon will be held at Walt Disney World over the last weekend of February 2022. While many runners are excited about the half marathon there is even more that participants can look forward to!

Yoga sessions at Magic Kingdom are rare, but they are becoming more and more popular. Disney has previously held a sunrise yoga class for Cast Members on Yoga Day, June 21. Now that yoga is being added to the lineup of activities planned for runDisney, perhaps we will see more yoga sessions during the year? We can only hope!

Related:Official SNEAK PEEK at “One of the Largest Nighttime Spectaculars” at Disney Parks

In-person runDisney events were canceled in 2020 due to the ongoing pandemic. Some events were replaced by virtual events, thankfully they are making a triumphant return to the Disney Parks. Runners can enjoy participating in marathons that take place inside and around the theme parks at Walt Disney World once again.

The upcoming Disney Princess Half Marathon will take place during the 50th Anniversary celebration of Walt Disney World. Meaning runners can enjoy this limited-time celebration of the Resort during their run, making this marathon extra special! Something that Disney has excitedly reminded runners of:

Disney has not yet held yoga at Disney’s Animal Kingdom, EPCOT, or Disney’s Hollywood Studios. But personally, I believe doing yoga in front of the Tower of Terror would be fantastic.