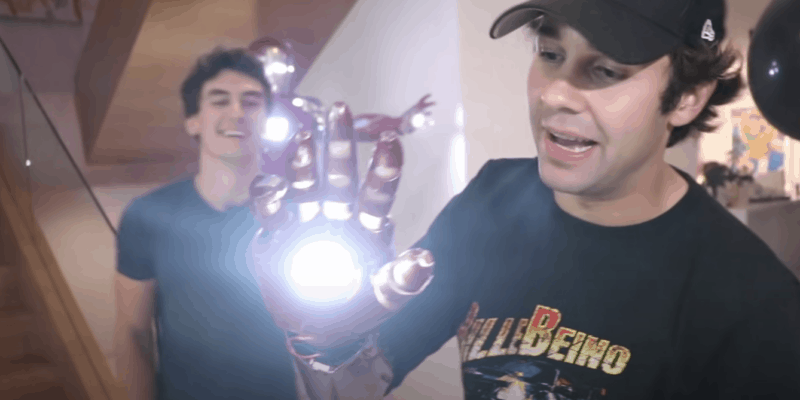 If you are a Marvel fan, you probably have dreamed about seeing the character’s suits and weapons in real life. Now, it seems that one YouTuber has gotten his hands on a few belongings from the Avengers themselves, and they all work!

David Dobrik is a YouTube sensation with almost 20 million subscribers on the platform, and he is also a big Marvel fan. David once paid over $9,000 for an Iron Man suit replica to display in his home, even though he was unsure if the seller was trying to scam him. From this, we can clearly tell that the MCU love is strong in Dobrik, and also, he has a lot of money to spend on some cool things.

In a few recent YouTube videos, Dobrik has shared clips of a few insanely cool Marvel-inspired objects that work just like you see in Kevin Feige’s Marvel films. In the below video, viewers can see Thor’s Asgardian hammer, Mjølnir, being helmed as it actually sparks lighting into the sky.

But, David’s Marvel collection does not stop there. Remember when we noted that Dobrik owned an Iron Man suit? Dobrik’s love for Tony Stark and Robert Downey Jr. could not end with a simple suit replica; he needed real functioning parts of the suit.

David was able to get his hands on a real Iron Man mask that responds to voice commands as Jarvis and will automatically cover your face when asked. The swift move of the mask is pretty incredible and looks just like Stark’s suit. You can see the mask just as the video begins below.

Dobrik also acquired an Iron Man glove with real Repulsors that can destroy things when pointed at them. You can check out how the hand works in the below video as it begins!

Dobrik has recently been in the hot seat after an Insider article was released accusing David Dobrik and other vlog squad members such as Jason Nash of negative and predatory behavior. Since then, David has apologized taken some time away from YouTube and social media, but has recently returned to making his weekly videos.

What do you think of David Dobrik’s Marvel collection? Let us know in the comments below!