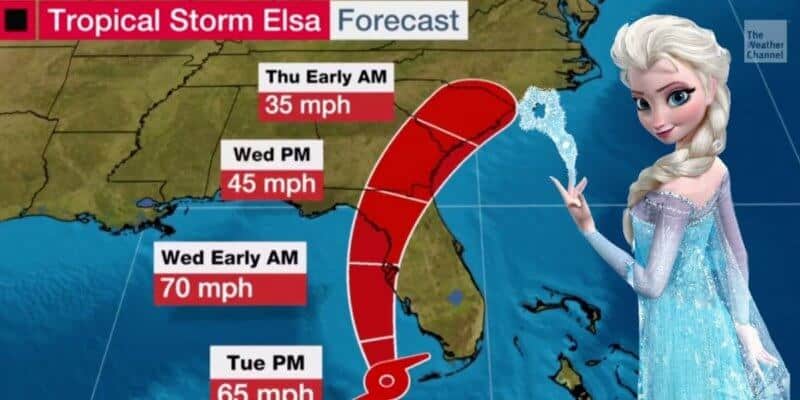 If you are in the Walt Disney World area today or tomorrow, be aware that Tropical Storm Elsa is expected to arrive later this afternoon as a flood watch has already been issued for Orange County.

The Weather Channel put out the following tropical storm statement:

**TROPICAL STORM ELSA NEAR KEY WEST AND THE DRY TORTUGAS*

CHANGES TO WATCHES AND WARNINGS: – None

CURRENT WATCHES AND WARNINGS: – A Tropical Storm Watch is in effect for Northern Lake and Southern Lake Counties.

Tropical Storm Elsa is continuing on its path as the Weather Channel warns Floridians that the strongest impacts should begin late this afternoon through early Wednesday morning:

Tropical Storm Elsa continues to move north-northwest near Key West and the Dry Tortugas early this morning. Elsa will turn north later today and move parallel to the Florida west coast through this evening, then turn north-northeast and make landfall as a strong tropical storm near the Florida Big Bend late Wednesday morning. Elsa will cross north Florida and move well away from central Florida by early Wednesday afternoon.

On its current track, Elsa’s strongest impacts will begin to be felt across east central Florida from late this afternoon through early Wednesday morning as the system moves northward and parallel to the Florida west coast.

Stronger squalls from Elsa’s outer rain bands will overspread the Treasure Coast and Lake Okeechobee region by mid day. Rain bands will increase in coverage and intensity as they spread north across all of east central through this afternoon and overnight into early Wednesday morning. Winds will gust to Tropical Storm force in most rain bands and squalls, and 50 to 60 mph in the most intense squalls.

The announcement continued to explain that there has been a flood watch issued for several counties, including Orange County:

Conditions will also become increasingly favorable for tornadoes to develop within fast moving squalls embedded within rain bands over the entire Florida peninsula starting later today and continuing into Wednesday morning. The greatest threat for tornadoes to develop across east central Florida will be from sunset this evening to a few hours after sunrise Wednesday.

A Flood Watch has been issued for Lake, Seminole, Orange and inland Volusia Counties. Rainfall totals of 2 to 4 inches are expected in the watch area, with isolated amounts to around 6 inches. Outside of the watch area, rainfall of 1 to 2 inches is expected, with local amounts to around 4 inches or so. The highest totals are expected closest to the track of Elsa’s center, across and adjacent to Lake County.

If you are visiting Walt Disney World today or tomorrow, please keep an eye on Tropical Storm Elsa as it could impact your vacation. Walt Disney World is also monitoring Elsa as they have already added hurricane meals to many of the menus. They will continue to make any necessary changes to its operations.

Inside the Magic will update you as we get information regarding Tropical Storm Elsa.

Have you ever been to Florida during a tropical storm? Let us know in the comments below.