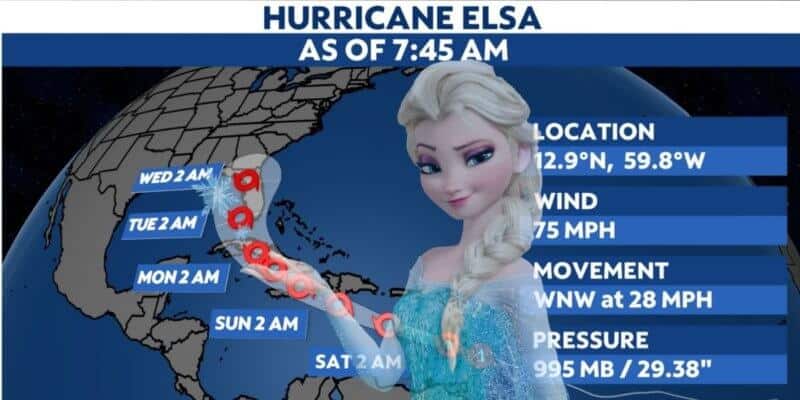 Hurricane season is officially underway in Florida as Tropical Storm Elsa has officially turned into Hurricane Elsa, according to My News 13.

That’s right — Elsa is about to “Let It Go” as she continues to make way for Florida.

At 8 a.m. Friday morning, Tropical Storm Elsa became a hurricane near Barbados. My News 13 shared a spaghetti model (below) of Hurricane Elsa, stating:

Spaghetti models are in good agreement that this system will remain on a steady west-northwest path into the weekend. As is often the case, though, they spread apart with time.

Spaghetti models or plots show a series of individual computer forecast models together on one map. They are useful to give insight into whether multiple models are in agreement or not on the path of the storm but they do not address the storm’s forecast intensity, winds, flooding and storm surge potential or other data.

Hurricane Elsa is heading towards Florida and could touch down sometime early Tuesday morning according to the most recent model, however, this is subject to change.

As My News 13 stated, we need to watch what this system could do next week as there’s a possibility the storm could move into the Gulf of Mexico or toward the Florida Peninsula early next week. Inside the Magic will continue to update you as we get information regarding Hurricane Elsa.

This would be the first major hurricane of the season, which started on June 1 and will last until November 30. The season peaks in August and early October, so Hurricane Elsa could just be the start of the hurricane season for Floridians.

If you are traveling to Walt Disney World next week, please keep an eye on Hurricane Elsa as it could impact your vacation. Walt Disney World is more than likely monitoring Elsa as well and will make any necessary changes to its operations.

Again, Inside the Magic will update you as we get information regarding Hurricane Elsa.

If Disney World does decide to close the theme parks, it would only be the ninth time in nearly 50 years. Per the Tampa Bay Times:

The Disney parks went nearly 28 years without an unscheduled closure until Hurricane Floyd came barreling down in 1999. The parks also were closed in the wake of the Sept. 11 terrorist attacks. There were a trio of closures due to hurricanes in 2004, others in Oct. 2016 for Hurricane Matthew and 2017 for Hurricane Irma.

The theme parks closed for an eighth time in March 2020 for nearly four months due to the COVID-19 pandemic.