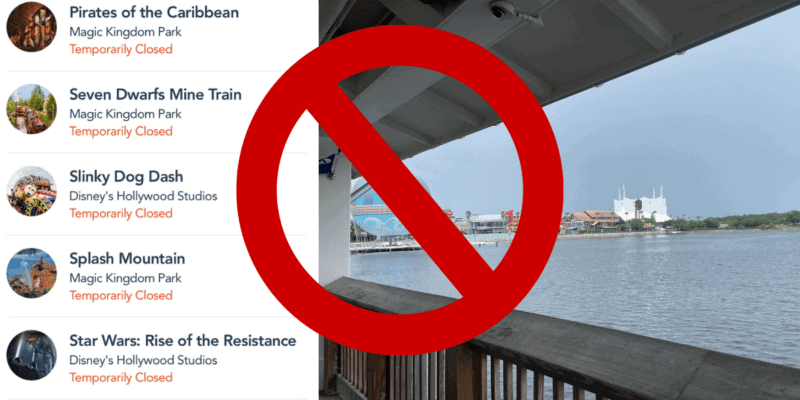 A huge amount of the attractions at the Walt Disney World Resort have come to a halt this afternoon due to a storm. The Orlando-based Disney Parks are often taken out by the inclement weather that is so common in the state but this afternoon saw over 20 of the theme park attractions temporarily close.

My Disney Experience is currently showing 23 of the Disney Resort’s attractions are currently not operating.

This is not the first time two of these rides have been down today. Just this morning it was also reported that Pirates of the Caribbean and Jungle Cruise both closed shortly after Magic Kingdom opened.

In Disney’s Hollywood Studios, Slinky Dog Dash, Lightning McQueen’s Racing Academy, and the fan-favorite and hugely popular, Star Wars: Rise of the Resistance are not operating.

This also marks the latest in a series of closures for Expedition Everest — the fan-favorite coaster in the heart of Asia at Disney’s Animal Kingdom has been having technical difficulties for the past few days.

All these attractions are currently closed at the time of publication.

While many of the popular rides at Walt Disney World are down, for the time being, there is still a whole host of popular attractions still operating like Millennium Falcon: Smugglers Run, Rock ‘n’ Rollercoaster Starring Aerosmith, Avatar: Flight of Passage, and The Twilight Zone Tower of Terror — although due to the unexpected closures of the other attractions, these attractions, at one point, had a combined wait time of almost 400 minutes. Guests can also visit Disney Springs to wait out the bad weather and avoid long wait times.

The surge in wait times at the open attractions can most likely be put down to the closures of the others — more Guests for fewer attractions at the Disney Park. Fingers crossed the weather doesn’t disrupt the 50th anniversary too much!

While it is a shame when unexpected things happen at a Disney Resort, Cast Members are usually on hand to help with any Guest queries or concerns. Recently, Disney’s Hollywood Studios ride — Rock ‘n’ Rollercoaster — faced an evacuation from its “highest hill” but Cast Members were on hand to safely escort the Guests off of the coaster and also provided them the opportunity to ride another attraction. Even at its most turbulent, the Cast Members still make Walt Disney World one of the most magical places on Earth, and are sure to make your Disney vacation special regardless of attraction closures.

The rides which faced closures caused by this event are now back open.

Have you ever faced multiple ride closures while vacationing at Walt Disney World? Let us know in the comments!