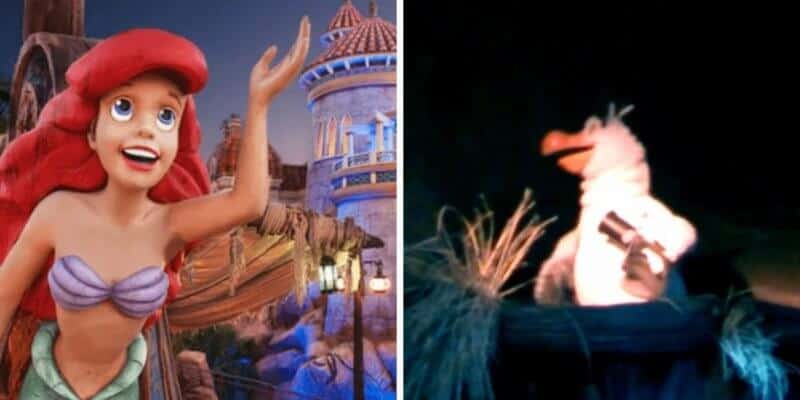 Under the Sea – Journey of The Little Mermaid is a popular ride located inside Fantasyland at Magic Kingdom in Walt Disney World. The ride is filled with several animatronics, each representing characters from the 1989 animated film, The Little Mermaid.

Guests are invited to hop aboard a seashell as they are taken through the story of The Little Mermaid. However, on one trip under the sea, Guests noticed that Scuttle, the eccentric seagull, was suffering from a broken wing!

One Reddit user, The_Inflicted, shared a video to the Walt Disney World Reddit group, showing the Scuttle animatronic suffering from a broken wing. Within the video, you can see part of Scuttle’s left wing dangling as he moves and talks to Guests. From the looks of the video, it seems like this is the animatronic that Guests see when they enter the queue, prior to boarding the seashells.

The caption of the video reads:

NSFM: Take these broken wings and learn to fly again, learn to live so free.

NSFM: Take these broken wings and learn to fly again, learn to live so free. from WaltDisneyWorld

Inside the Magic is sending Scuttle well wishes, and we hope he has a speedy recovery! At the time of publication, the attraction is up and running with a posted 5-minute wait time.

More on Under the Sea – Journey of The Little Mermaid

In case you have never had the chance to experience Under the Sea – Journey of The Little Mermaid, the official Walt Disney World description reads:

Have you ever ridden Under the Sea – Journey of The Little Mermaid? Let us know in the comments below.