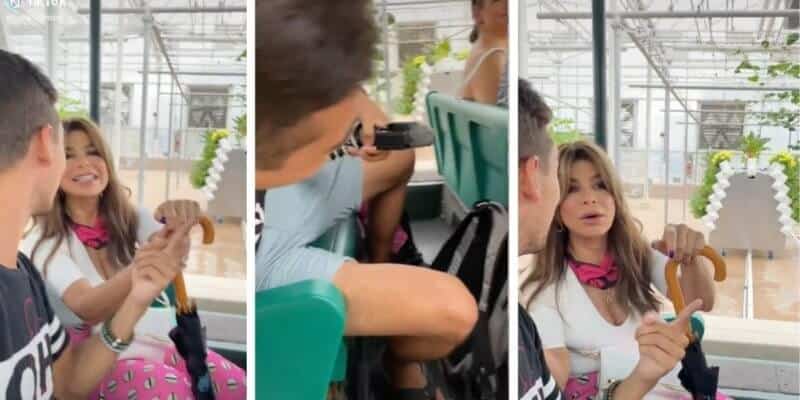 Many celebrities visit the Orlando theme parks each year, but have you ever imagined what it would be like to hang out with one all day long at either Universal Orlando Resort or Disney World?

Over the Fourth of July Holiday weekend, singer and original American Idol judge Paula Abdul decided to fly into town so that she could experience all of the best theme park offerings in Orlando. The Hollywood star went to Magic Kingdom, EPCOT, Disney’s Hollywood Studios, and Disney’s Animal Kingdom, as well as Universal’s Islands of Adventure.

Accompanying Paula was Orlando-based viral TikTok star, JoJo Crichton! JoJo (@jojocrichton) is well known on the social media platform, as well as YouTube for his theme park content, and it seemed that Paula must have seen how he spends his day at the parks, and wanted to do the same.

In just one day, the pair hopped around all of the Disney World Parks, where Paula was seen having the time of her life even in the pouring rain! At Universal, Abdul even hopped on Jurassic World VelociCoaster with JoJo, and then experienced the Wizarding World of Harry Potter.

JoJo has already posted a lot of fun TikToks of their time together, but my personal favorite has to be Paula jokingly telling JoJo to grab a snack while riding Living with the Land. Considering we just recently reported on a Guest hopping out of the ride vehicle and falling while attempting to steal a cucumber, Abdul was clearly joking about that instance.

@paulaabdul said I should get some food from living with the land ? #disneyworld #epcot #livingwiththeland #jojosworld #epcot

@paulaabdul said I should get some food from living with the land ? #disneyworld #epcot #livingwiththeland #jojosworld #epcot

Below we can also see the pair riding Expedition Everest and is seems Paula really enjoyed herself.

On Rise of the Resistance, the two even put on an entire dance number while in the queue.

We put on a show for the First Order ?? @paulaabdul #disney #starwars #disneyworld #fyp #stormtrooper

We put on a show for the First Order ?? @paulaabdul #disney #starwars #disneyworld #fyp #stormtrooper

It seems that the two had a great time hanging out at Disney World and Universal Orlando Resort this weekend!

Where would you take Paula Abdul if she was spending the day with you at the Orlando theme parks?