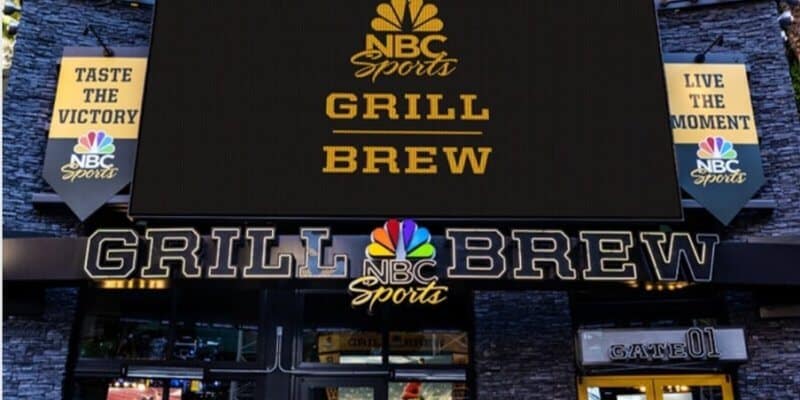 The Universal Orlando Resort is home to Universal Citywalk is which boasts 22 unbelievable dining experiences and options to choose from. From Antojitos serving authentic Mexican cuisine to new and exciting Asian fusion dining.

Universal announced that NBC Sports & Grill Brew is now open at Universal CityWalk in Hollywood. Here are the details:

Universal CityWalk spectators and al fresco diners alike will also be awed by the giant media wall located at the restaurant’s front exterior. Measuring a whopping 23 feet by 13 feet, the HDTV monitor will put guests at the front row of the latest sports action.

Although the menus are altered a bit differently from Orlando to Hollywood, these two properties still offer the same pub bar feel and allow Universal fans a chance to take pleasure in their favorite sports team in action on high def screens as Universal Studios Hollywood states.

Here is a look at some of the menu items you can enjoy at NBC Sports & Grill Brew:

The inspired menu includes vegetarian, vegan and gluten-free options as well as traditional fare with an array of cleverly themed courses.

These include: The Starting Lineup features mouthwatering appetizers from Wings and Fish Tacos to Loaded Nachos and an Artisan Pretzel. Home Run Handheld takes burgers to new heights with such tempting fare as Roadside Chili Burger, Gruyere Burger, Beyond Burger, Nashville Hot Fried Chicken Sandwich and the Brat Pretzel Press. The Chili Bowl and The Grain Bowl add tasty twists to The Bowl Games menu section.

Check out the entire menu here which includes more than 40 beer selections to choose from!

Are you excited to try this new addition to Universal Studios Hollywood? Let us know in the comments below!