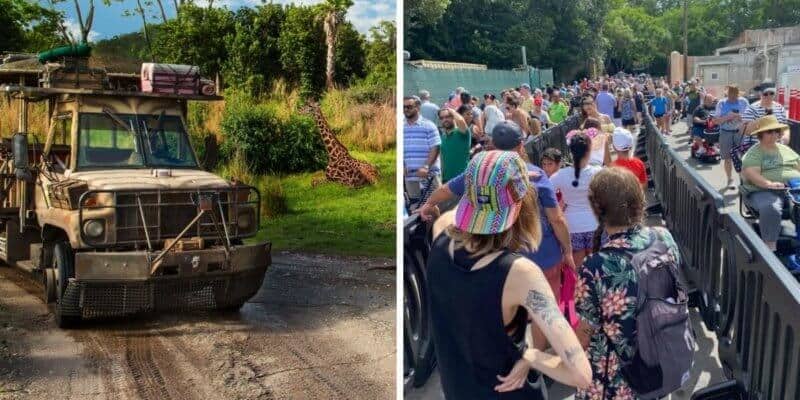 Despite the theme parks at Walt Disney World phasing out social distancing, long lines are continuing to form — forcing the theme parks to open backstage to accommodate Guests.

We recently reported on how the queue for Mickey & Minnie’s Runaway Railway at Disney’s Hollywood Studios has been extending outdoors pretty frequently. Additionally, we reported on how the line for La Cava del Tequila in EPCOT forced the theme park to open backstage to accommodate.

Now, we are continuing to see Disney opening backstage due to long lines forming for attractions.

Connie posted the photo to the Annual Passholders – Walt Disney World Facebook group and shared that the line actually began at Starbucks! However, despite the long line and posted wait time of 65 minutes, Connie told Inside the Magic that they only waited 40 minutes.

We do know that the capacity levels at Walt Disney World have already begun increasing since the theme parks first reopened last summer as Disney CEO Bob Chapek confirmed this earlier this year. At this time, we do not know exactly what percentage of capacity Disney World is operating at, but we know it is higher than 35% — And you can see from the crowds and long lines, the capacity increase is obvious.

If you are planning on visiting Disney World on your next vacation, be sure to familiarize yourself with the current safety protocols at the theme parks. The Disney Parks are continuing to evaluate the protocols and modifying them as needed. For example, you can expect to see a bit more “normalcy” compared to last summer when the theme parks first reopened after temporarily closing due to the ongoing pandemic.

If Guests visit one of the theme parks in the near future, they will notice a relaxed face mask protocol, reduction in social distancing, increased capacity, and more. You can view the most up-to-date protocols at the Disney Parks by visiting the official Walt Disney World website here.

Have you ever waited backstage for a Disney ride? Let us know in the comments below.