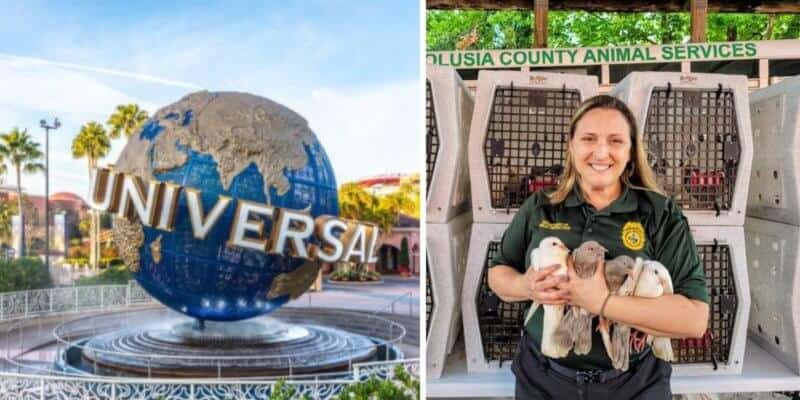 Universal Orlando Resort can not only change the lives of the Guests who enter the theme park with a day they will never forget, but it seems that it can also save the lives of injured birds found on the side of a highway.

When Guests think of a bird show at a theme park in Orlando, many may assume that the show in question is at Disney’s Animal Kingdom; however, Universal has an animal show as well. In Woody Woodpecker’s Kid Zone at Universal Studios Florida, Guests can typically enjoy the live Animal Actors On Location! show. Although the show is not currently back after closing due to the pandemic, it featured many highly trained animals, stunning audiences each day.

The pigeons fell out of a crate off the back of the truck on one of the state’s busiest highways, injuring their feathers along the way. Volusia County Animal Services, the Florida Highway Patrol, and Florida Fish and Wildlife Conservation Commission all worked together throughout the evening to rescue 70 birds that likely would have ended up as roadkill in their condition.

As no one claimed the birds, Universal Orlando Resort decided to take them under their wing! The birds will train to be a part of a flight show, which could very well be Animal Actors on Location! as that show featured birds as well. For now, Volusia County Animal Services are nursing the birds back to health before they move to Universal Orlando Resort to begin training.

News 6 WKMG (@news6wkmg) posted the story to Twitter and shared a photo of the rescued birds!

A flock of homing pigeons that were once potentially roadkill will live out the rest of their days at Universal Orlando.

A flock of homing pigeons that were once potentially roadkill will live out the rest of their days at Universal Orlando. https://t.co/nn7VkKCYi4

We already know about Disney ducks, but I don’t think we have ever discussed Universal pigeons! Considering these birds have already undergone a very stressful event, they will now be able to relax and live at the theme park under some of the best care each day.

This news is also exciting because it means that Universal is preparing to bring another show back to their theme park! No news has been announced on any return, but if they are training animals for a show, it is likely we will see one in the future again.

Do you think Universal Orlando Resort is creating a new show? Or do you think these birds will be used for an existing show?