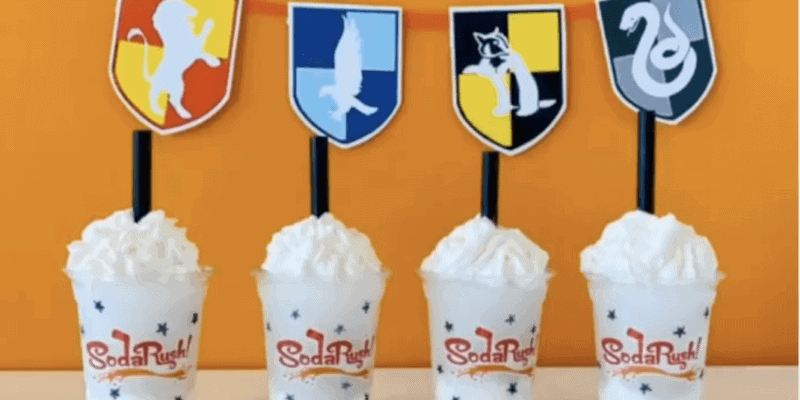 “Oh you may not think I’m pretty

But don’t judge on what you see

I’ll eat myself if you can find

A smarter hat than me”

One of the most popular aspects of being a Harry Potter fan is talking to other fans about what Hogwarts House you are in — whether it is Gryffindor, Hufflepuff, Ravenclaw, or Slytherin. Each student who attends Hogwarts is sorted into one of the four houses by the infamous Sorting Hat, which reads into who you are and places you accordingly.

However, one store in Arizona is saying goodbye to the Sorting Hat and hello to sorting…milkshakes?

SodaRush in Arizona has created new milkshakes that will sort you into your very own Hogwarts House. The shake looks completely normal when you order it, but begin to stir, and boom! The color changes to match with your Hogwarts House — red for Gryffindor, blue for Ravenclaw, yellow for Hufflepuff, and green for Slytherin.

The store shared a video of the amazing shake on its Instagram page.

If milkshakes or Harry Potter are not your thing, the Arizona store also has something for the Disney fan. SodaRush serves their very own version of a Dole Whip, that comes not only in the soft-serve ice cream form but also as an incredible cookie!

Did you know today is the first ever Dole Whip Day!?!
And the timing couldn’t be more perfect because our theme for the week is Disney! ❤️??

We have the Official Real Deal Dole Whips in All Three shops all the time, but this week we are adding ears to make them extra fun! ❤️??

We also have our Dole Whip Sugar Smash with Real Dole Whip in the frosting! ?

And if you are not a pineapple fan we also have some ice cream treats in theme ready for you to enjoy as well! ?

And today we are giving away Free Mouse Ears with every Mouse Ear ice cream or Dole Whip Purchase!

Have you had one of SodaRush’s scrumptious shakes or cookies? Let us know in the comments!

Comments Off on Move Over Sorting Hat. Sorting Milkshakes Are Now a Thing!