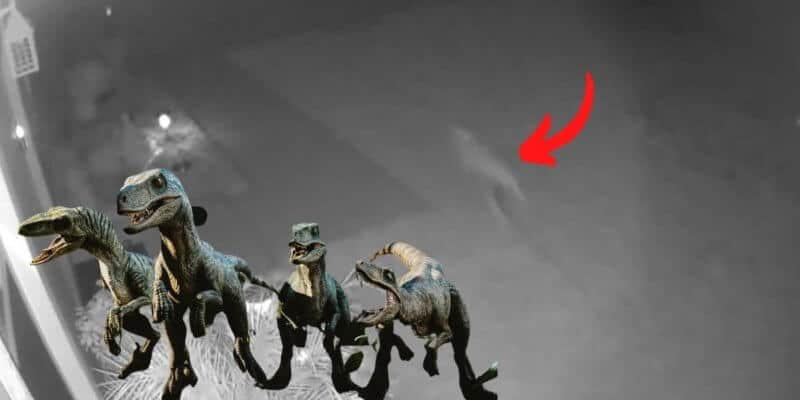 A few months ago, a Florida woman claimed that a baby dinosaur ran through her backyard. Now, it seems we have an update on the story.

Back in April, Florida resident Cristina Ryan caught something running through her yard on camera and was sure it was some sort of dinosaur. Ryan said:

“Any animal we can come up with that would be ‘walking’ at 3:40 in the morning, wouldn’t walk this way,” she told FOX 35 News. “Maybe I’ve watched ‘Jurassic Park’ too many times, but I see a raptor or other small dinosaur!”

Fox5NY (@fox5ny) Tweeted the article with the photo in question, noting:

A FOX 35 viewer says her security camera captured the footage this week.​

A FOX 35 viewer says her security camera captured the footage this week.​ https://t.co/lOCXkBZHN7

As Universal was gearing up to open Jurassic World VelociCoaster, the idea of finding a baby raptor running on the loose fit perfectly with the theme park’s narrative. Universal often uses their Twitter account as a comedic platform, and as soon as Fox5NY Tweeted the article, they re-Tweeted it and joked about counting their raptors in the paddock.

The theme park mogul then quipped that the dinosaur on the loose did indeed belong to them! Universal Studios Hollywood (@UniStudios) even got in on the fun and noted that there was an “asset out of containment” at Universal Orlando Resort.

When the story broke in April, many people had opinions about what the creature could be, from dogs to reptiles. All guesses aside, there was never a clear answer regarding what it was that ran across Cristina’s lawn that night.

A few weeks ago, Fox5NY updated their story with another comment from the homeowner, and it seems that she is still convinced it was indeed a baby raptor running across her yard. The article’s update now reads:

In an update on Tuesday, Ryan says she is sticking with her original conclusion.

“There has never been an answer to what it was. Even despite asking neighbors. We are all still convinced it’s a dinosaur!”

Maybe those raptors got a little more riled up after being poked on VelociCoaster than we thought!