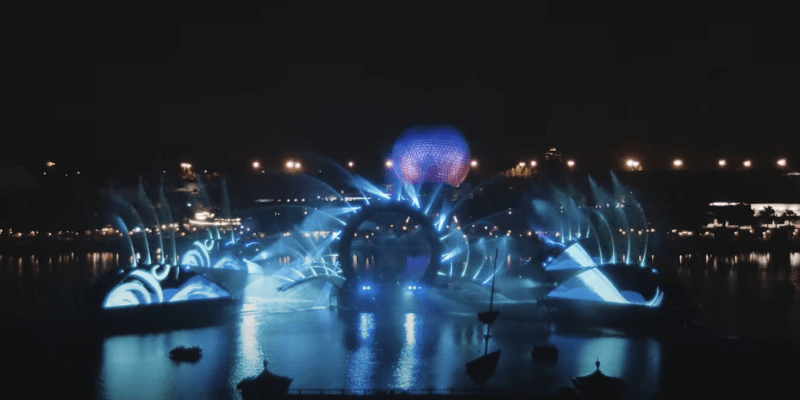 One show that many Disney World fans are looking forward to lighting up the night sky is Harmonious. Harmonious is set to be the biggest nighttime spectacular Walt Disney World Resort has ever seen, and with an October 1 debut on the Resort’s 50th anniversary, the show is sure to be the talk of EPCOT.

For months now, Guests entering EPCOT have seen the World Showcase lagoon filled with black barges that, for many, seem to be a distraction from the beauty that the World Showcase possesses. Still, from the sounds of it, it seems that although it looks like nothing now, it will be something spectacular soon.

Disney just released some behind-the-scenes footage of the show and discussed the storyline Guests would be able to follow while watching. Disney Parks Blog noted:

The show moves through three distinct chapters, inviting us to gather on the shores of World Showcase Lagoon, celebrate the countries and cultures of the world, and ultimately unite to create a bright tomorrow. “Harmonious” begins with a sunrise, and as the world awakens around us, we set out on a journey that takes us across the globe. It’s a dazzling and diverse feast for the eyes and ears, from the South Pacific home of “Moana” and a Middle-Eastern interpretation of “Aladdin” to “The Jungle Book” in India, China’s legend of “Mulan,” the European nations that inspired “Brave” and “The Hunchback of Notre Dame,” and so much more.

In a video, Disney also showed off some of the barges in action, and it looks like there will be some beautiful imagery created for Guests to enjoy. The video titled “Behind The Scenes: ‘Harmonious’ – A Story Of Global Connection & Celebration | Walt Disney World” has many from the HarmonioUS team discussing the show and how it will progress.

There will be three sections. The first is titled “Gather,” which is when Disney will gather all the Guests from EPCOT to join together around the World Showcase. The show will begin with a variety of languages spoken so each Guest can see themself in the show. Disney also chose to use many silhouettes in this section so that Guests can once again place themself within the imagery they are seeing. The second part of the show is “Celebrate” and will go into the World Showcase pavilions. The third part is “Unite,” which will take the spirit of EPCOT and put it front and center.

In the video below, we can hear that Disney believes Harmonious will being Guests together in a way no theme park has ever been able to do before. Take a look for yourself below!

Are you excited to see Harmonious debut? When do you plan to see the show?