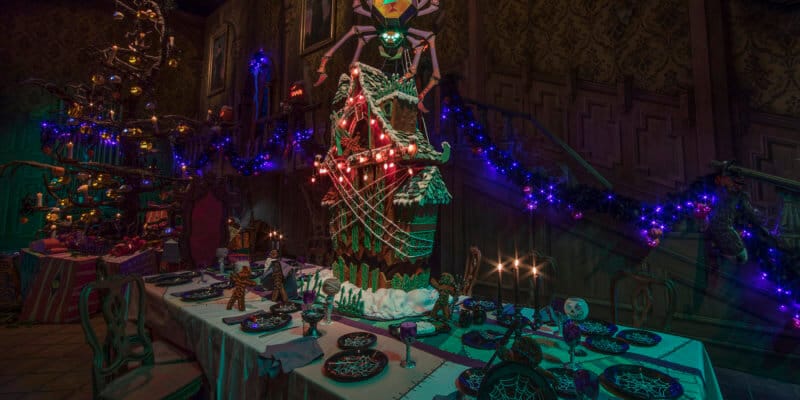 Today marks Disney’s Halfway to the Holidays celebration, which means lots of holiday season announcements for Disney Parks lovers! One of this morning’s most exciting reveals for Disneyland Resort fans is the Nightmare Before Christmas-themed gingerbread house that will be part of the Haunted Mansion Holiday overlay.

We chatted with Tim Wollweber, associate art director for Disney Parks, who designed this year’s house. For 2021, the team decided to pay homage to all previous houses in celebration of this beloved tradition’s 20th anniversary. Tim mentioned, “we went back to the graveyard to dig up all of our ideas from the past 19 years. This year’s Franken-house stitches together favorite elements from the previous 19 houses!”

The post went on to outline all of the past houses, and, as you can see in the concept art [above], the 2021 Nightmare Before Christmas gingerbread house at Disneyland Park does indeed draw from all of the prior designs:

Haunted Mansion Holiday will be available from September 3 – October 31, 2021.

It is worth noting that the annual Halloween celebration at Disneyland Resort’s Disneyland Park and Disney California Adventure Park did not occur last year due to the property’s lengthy pandemic-related closure, so this year’s return is especially exciting!

The official description of Tim Burton’s Nightmare Before Christmas on Disney+ reads:

Enter an extraordinary world filled with magic and wonder, where every holiday has its own special land. This is the heartfelt tale of Jack Skellington, the Pumpkin King of Halloween Town and all things that go bump in the night. Bored with the same old tricks and treats, he years for something more, and soon stumbles upon the glorious magic of Christmas Town. When Jack decides to bring this joyful holiday back to Halloween Town, his dream to fill Santa’s shoes unravels, and its up to Sally, the rag doll who loves him, to stitch things together again.

Will you be visiting Disneyland Resort to see the gingerbread house this Halloween season?

Let the expert team at Academy Travel help you plan your next magical vacation to Walt Disney World Resort and Disney Springs in Florida or Disneyland Resort and the Downtown Disney District in California!

Comments Off on Disneyland Has Created Its Most Elaborate Gingerbread House EVER!