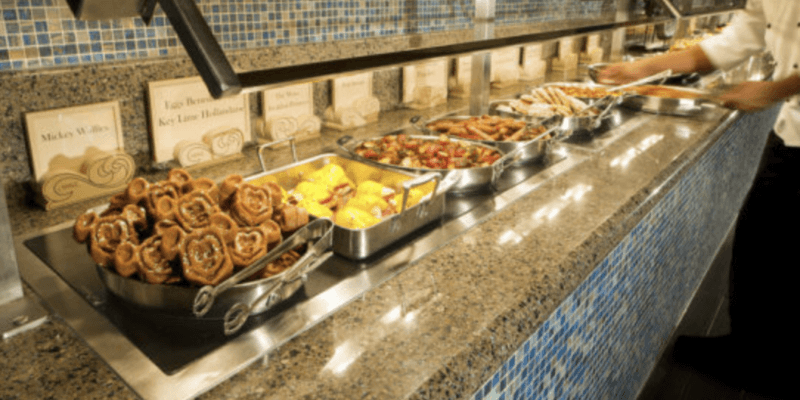 There are a number of things Walt Disney World Resort is known for — its sheer size, its four incredible theme parks and two water parks, amazing storytelling, and the incredible amount of tasty food offerings found throughout its 27,000 acres.

When it comes to the food, there are just so many options and, before the pandemic, buffets were one of the most in-demand dining experiences on property. Unfortunately, buffets have not made their return yet and family-style dining has become the Disney World norm at places like Cape May Café, Hollywood & Vine, and Crystal Palace.

Now, there is always the question of when, but now, the ultimate question is why? Why has Disney World not brought back their super popular buffets — many of which include character dining. While some meals now have modified character experiences, things just aren’t the same as when they offered a slew of amazing buffet options.

One of the key issues in bringing back buffets may be staffing, but it has been reported that Disney World has brought back more than 80% of its Cast Members. It must also be kept in mind that a number of those Cast Members still furloughed may be ones who work at Typhoon Lagoon, which remains closed at this time with no opening date on the horizon, or other areas of the Parks and Resorts that have not yet reopened. So, with so many Cast Members returning to The Most Magical Place on Earth, it seems that at least some buffet options could return.

What makes the lack of buffets at Disney World equally surprising is the fact that Disney Parks and Resorts have shown that they do want to bring the popular offering back — and they have in some regard. Mickey’s Tales of Adventure character buffet dining at Storytellers Café recently opened at Disney’s Grand Californian Hotel & Spa at Disneyland Resort in California, and Guests were quick to book their reservations.

Over at Disneyland, Mickey’s Tales of Adventure character buffet is modified at this time, but only in regard to the character dining. The buffet is back in full force, with Guests being able to walk up to the counter and take the food that they want. The return of buffet dining at Storytellers Café is only the first step in a return to normal for Disney dining options, but it is surprising that it happened at Disneyland first. The theme park had been taking things much slower than its East Coast counterpart.

Disney has also announced that buffet-style dining will return to the Disney Cruise Line — also in a modified fashion. Disney has announced that buffet dining at Disney Cruise ships will be offered, but the food will not be self-serve. Instead, Crew Members will be standing behind the counter, ready to serve Guests during designated dining hours. According to the DCL website:

Quick-Service Food & Beverage Locations
Quick service food and beverage locations, including buffets, still offer all-you-care-to-eat bites and treats, and are served by Crew Members at designated times each day throughout the cruise. All food and beverages that were previously available at self-service stations will now be served by Crew Members.

With Disney wanting to keep Guests safe during these unsure times, it may make sense for Disney to be hesitant about buffet dining, but having it return to cruise ships seems to signal that it could return anywhere. Personally, I think that Disney World could really make buffet dining work, as well as keep Guests protected if they had Cast Members serving the food like they will be doing on cruise ships.

While buffet dining is still a no-go at Disney World, there may be hope on the horizon. Disney is currently hosting a job fair and is looking to hire thousands of new Cast Members for its Florida theme parks. They are looking for people to fill a number of positions, including culinary ones. Hopefully, that means that Disney will be announcing the return of buffet dining sooner rather than later!

Do you hope to see buffets return to Disney World soon? Which buffet dining experience is your favorite? Let us know in the comments!

CLICK HERE to book your fun-filled foodie adventure at Disney today with our friends at Academy Travel – an EarMarked Diamond agency that can provide you with a free quote!

Comments Off on Can Buffets Return to Disney World? Should They?