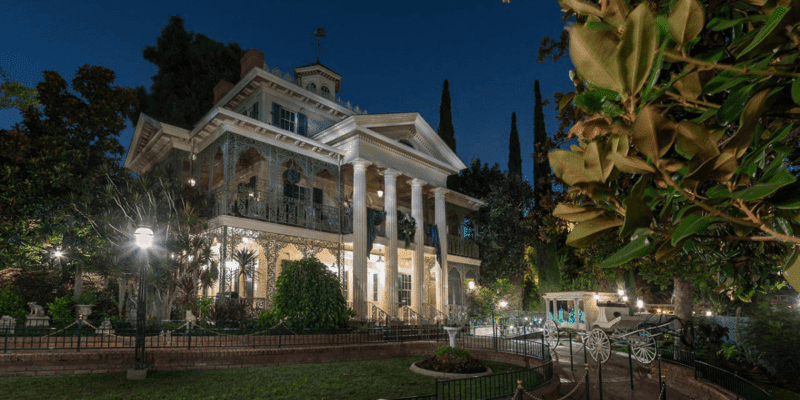 Disneyland’s Haunted Mansion in New Orleans Square is a staple attraction and fan-favorite ride since it opened in 1969. Filled with grim, grinning ghosts, this foolish fright also features some fantastic features that are fatally flawed.

The history surrounding the Haunted Mansion at Disneyland has grown in popularity over recent years and is well-known among many Disney Parks fans. Everything from hidden names on the tombstones to the Pepper’s Ghost Effect is run-of-the-mill fun facts that fans of the mansion like to share, but there’s one major problem with the Haunted Mansion that you probably didn’t know about.

Right after you’ve enjoyed the impressive ballroom scene, where friendly ghosts (including Julius Caesar, who’s not friendly) come out to socialize at the Ghost Host’s gathering, and before you turn left and climb into the attic scene, look straight ahead at the third-to-the-left pane of glass utilized for the Pepper’s Ghost illusion, and you’ll see a spider. It will catch your eye if you look straight toward the two portraits shooting at each other.

Related: How Props From Haunted Mansion Ended Up at Jungle Cruise

While many rumors and stories surrounding this spooky spider are found on the internet, reports indicate that sometime in the summer of 1974, a Guest entered the Southern California Haunted Mansion with a .22 caliber rifle and reportedly shot at the ghost.

Fun fact, you can’t shoot ghosts (because they’re dead, duh!), but you can shoot at the thick pane of glass that separates the Haunted Mansion’s doom buggies from the ballroom. This huge glass was placed in the attraction’s foundation before the show building was actually completed. So essentially, Walt Disney Imagineering built the Haunted Mansion around this multi-million-dollar glass.

As a result of the bullet hole, a spiderweb-like fracture formed in the glass.

Related: There Is a Secret Donald Duck Inside the Haunted Mansion

According to Haunted Mansion Backstage, as well as other avid Disney fans and Haunted Mansion historians, the cost to replace this glass would be monumental and would require the show building’s roof to be completely removed to tear down this glass wall.

In the height of Disney’s dark ages after Walt Disney’s unfortunate passing in 1966, The Walt Disney Company was tight on money and resorted to covering this bullet hole with a simple artificial spider.

You can see the famous spider in the Haunted Mansion in the video below:

What a fun fact! Never would you imagine someone sneaking in a rifle to shoot at ghosts, but this cutting-edge technology in the 1970s seemed to spook some Guests! Of course, in this day and age, this wouldn’t happen, but it is an interesting piece of Disney Park history.

While Space Mountain at Tomorrowland or Mickey’s Toontown features some interesting secrets that help tell the magic at this popular Orange County theme park, Disneyland’s Haunted Mansion showcases one of the greatest “problems”  of the beloved attraction.

Did you know this about the Haunted Mansion? Let us know in the comments below!