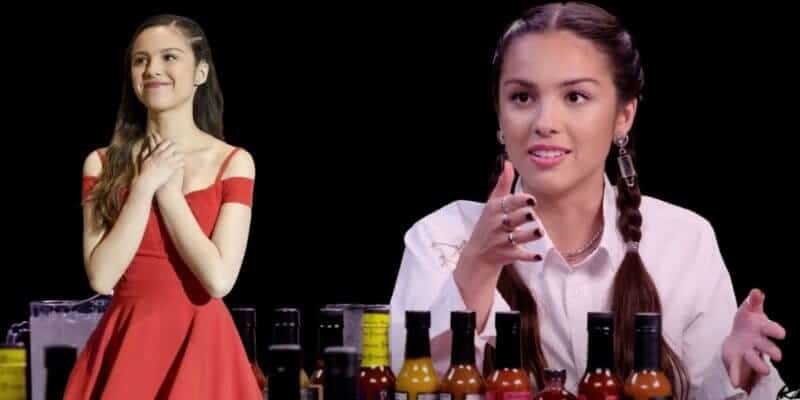 Disney star Olivia Rodrigo has been in the spotlight a lot over the recent months.

Aside from starring in the second season of High School Musical: The Musical: The Series on Disney+ where Rodrigo plays Nina Salazar-Roberts, the singer/songwriter/actress just released her debut album “SOUR”, which left her fans raving. The quick rise to stardom has allowed Olivia to get onto a few other interview-based shows, such as the popular YouTube series “Hot Ones” with Shaun Evans.

“Hot Ones”, found on the YouTube channel First We Feast, is a show that many Hollywood celebrities, athletes, or anyone with notoriety wants to be on. Interviewer Shaun Evans asks his Guests a variety of interesting questions many have never been asked before, while both Evans and the Guests eat chicken wings with increasingly hotter hot sauces poured on top.

Even celebutante Paris Hilton appeared on the show and admitted to wearing prosthetics at Disney to remain incognito. The show is fantastic because many Guests share or reveal something they may not have otherwise said, all because of how they react to the hot sauce.

When Rodrigo recounted her first major solo performance at the 2021 Brit Awards, she even noted that she was unsure if she was allowed to say this but dove into the housing she stayed in during her time in London. It was an 18th-century cottage-style home, and because of issues with the heating system, Rodrigo and her team would keep the fireplace running.

Rodrigo recounted that she woke up to smoke one evening and could not stop coughing, and had to leave the house. She spent the day very dizzy, drowsy, and threw up countless times, and noted to Shaun that she believed she had experienced minor carbon monoxide poisoning!

This was the first time Rodrigo ever disclosed this story to the public. Although terrifying at the moment, we are glad to see that Olivia is doing much better and was not seriously affected by the smoke.

If you want to check out the entire episode, take a look below!

Currently, Disney fans can catch Rodrigo on season 2 of High School Musical: The Musical: The Series, where her character Nini is playing the role of the rose in East High’s rendition of Alan Menken’s Beauty and the Beast.