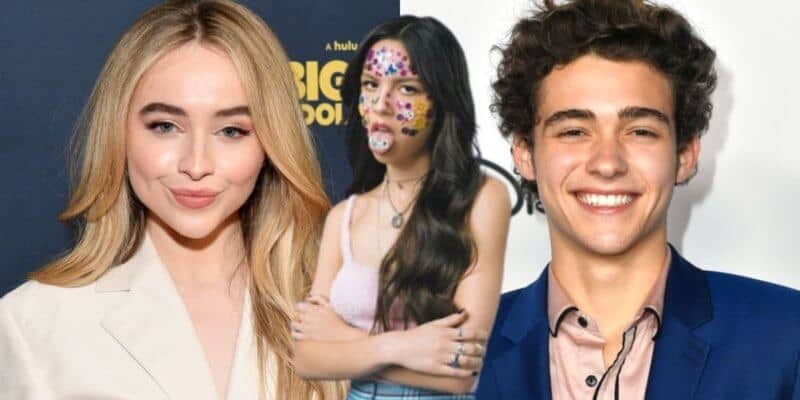 Disney+ continues to pave the way for stardom as the company consistently casts young actors in a lot of their “teen-genre” content, who then tend to quickly rise to fame and make their mark in Hollywood.

When High School Musical: The Musical: The Series debuted on the streaming service in November 2019, Disney fans erupted with excitement. The show not only drew a slightly older audience who felt the nostalgia of the original High School Musical franchise starring A-list celebrities like Zac Efron, Vanessa Hudgens, and Ashley Tisdale, but also it welcomed a new, younger audience to the IP.

The show is described as:

As mentioned, one of the main “showmances” that led to a real-life relationship was between two of the show’s leads, Joshua Bassett (who plays Ricky) and Olivia Rodrigo (who plays Nini). The couple ended up going their separate ways, and Bassett reportedly moved on to pursue a relationship with singer (and former Disney Channel star) Sabrina Carpenter.

If you did not know, High School Musical: The Musical: The Series is a musical series, so, of course, the cast is composed of excellent singers! Olivia Rodrigo has quickly been recognized as her singles such as “good 4 u” and “driver’s license” blew up all over the internet and social media platform, TikTok.

Now, Rodrigo has released her debut album SOUR which is almost a vocal diary about past relationships. Though Rodrigo has not explicitly stated that the songs depict her and Basset’s former relationship, it really does seem to shed some light on her breakup with costar Joshua Bassett, and her feelings about his apparent relationship with his (then) new girlfriend Sabrina Carpenter. The album is already #1 on iTunes just hours after it was released.

Her first single, “driver’s license” seemed to reference Carpenter, and fans of both the Disney+ show and the couple’s relationship went wild:

“And you’re probably with that blonde girl / Who always made me doubt / She’s so much older than me / She’s everything I’m insecure about.”

Bassett then released what seemed to be a rebuttal track titled “Lie, Lie, Lie,” while Sabrina Carpenter also released a song titled “Skin” which seemed to be a response to Rodrigo’s song and reference her being with Bassett.

All of this being said, now that SOUR has dropped, alongside season two of High School Musical: The Musical: The Series, many Disney fans are interested to see how the on-screen relationship blossoms, while the pairs real-life relationship continues to navigate the bumpy waters of the breakup. Plus, with Taylor Swift being credited on the album for the song “1 step forward, 3 steps back” (which samples Swift’s “New Year’s Day”), Rodrigo is certainly in the spotlight.

Olivia Rodrigo is now trending her Twitter, and it seems unanimous — everyone loves  SOUR.

olivia rodrigo made brutal 2 minutes and 23 seconds because she knew if it were any longer I’d start setting fires #sourolivia pic.twitter.com/5xP0BDYiqC

Olivia Rodrigo is trending #1 in the U.S as she should be!!!! #SOUROlivia

Olivia Rodrigo is trending #1 in the U.S as she should be!!!! #SOUROlivia pic.twitter.com/TL4pxIt2Rh

Allie (@xoalliemo) noted that Rodrigo has blown up the internet:

miss olivia rodrigo taking over my timeline today AS SHE SHOULD

miss olivia rodrigo taking over my timeline today AS SHE SHOULD pic.twitter.com/EObRSxhbsH

High School Musical: The Musical: The Series Season 2 currently has two episodes released, and the second season is described as:

Also, with Dancing with the Stars‘s Derek Hough making his debut in the Disney series, the show is quickly gaining a lot of attention from a variety of audiencves! It will be interesting to see how the series unfolds with Rodrigo, Bassett, and the rest of the cast, especially knowing what is going on in the private lives of some of the cast members involved.

Have you been watching High School Musical: The Musical: The Series? What do you think about the ongoing drama off-screen?