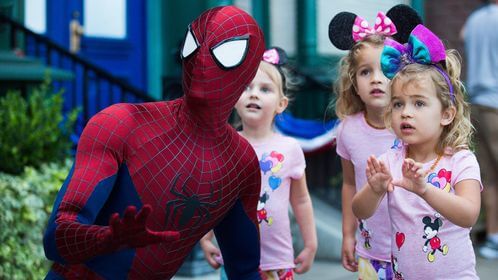 Avengers Campus is almost ready to welcome new recruits, and Disney Parks are showing off just how excited they are by adding some fun new details.

Instagram user and Disney blogger @Disney_Hype_Beast80 recently shared a photo of a new mural in Downtown Disney featuring the web-slinger soaring high above buildings in the new land, complete with his classic selfie pose. (If the moment reminds you of Tom Holland, you’re not alone — the mural is tailored specifically to reflect Holland’s version of the character, as Holland’s Peter Parker/Spider-Man is who fans will see in Avengers Campus.)

The painting is by Scott Tolleson and you can find it over by the ESPN building. Take a look!

The debut of Avengers Campus was delayed because of the pandemic, but this week the gates to Disney’s first official Marvel super hero land will officially open. And in case you weren’t aware, Spider-Man will feature heavily in the land’s attractions — from character encounters to the WEB SLINGERS: A Spider-Man Adventure attraction to special food that you can only get in Avengers Campus.

This mural is also a hint at Spider-Man’s presence in the land. Disney has shared that Guests can see Spidey flying high above the buildings and swinging through the sky while they walk through the park — an added excitement for fans and kids alike.

Avengers Campus opens just a few days after Tom Holland’s birthday, and Spider-Man: Far From Home debuts this December. Fans are currently waiting for a trailer but despite Sony’s teasing, we’re still in the dark about what the third film will be about. We do know that it will likely involve the multiverse, that it will include previous Sony Spider-Man characters like Doc Ock, Elecktro, and possibly Green Goblin, and that it might even include previous Peter Parkers and Mary Janes that initially started the franchise.

For fans that can’t wait to see Spider-Man before his MCU return, they can catch all the excitement at Avengers Campus. You might even get to earn your own Avengers cred if you can spot Peter Parker flying through the sky!

Are you excited to see Spider-Man at Avengers Campus? Let us know in the comments!