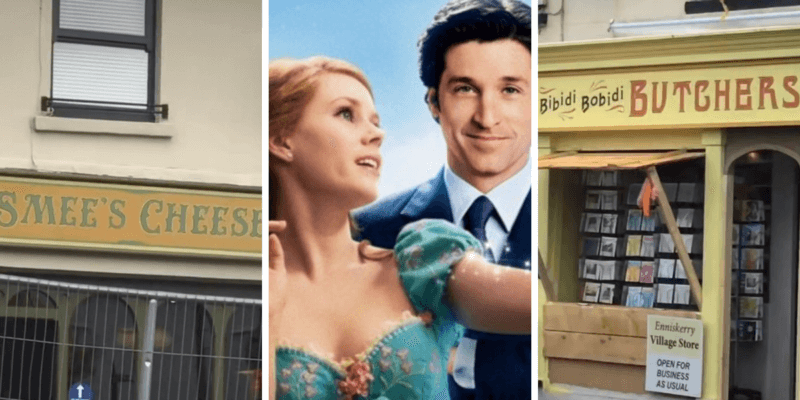 This year we have received some major news when it comes to the Enchanted sequel, now known as Disenchanted!

We know that most of the 2007 film’s cast is making their return to reprise their characters, including Amy Adams reprising her role as Giselle, Patrick Dempsey as Robert Philip, James Marsden as Prince Edward, and Idina Menzel as Nancy Tremaine. We have also heard of the possibility of Snow White’s seven dwarves making  an appearance as well. But now a look at the set gives us even more insight into the characters that could be coming to the film!

Now thanks to an Ireland local, we’ve seen a little more detail when it comes to the Disenchanted set. These details also hit at possibly more iconic Disney characters to be involved in the project.

As we’ve learned, Disenchanted is currently in production and is filming in Ireland. TikTok user, Edith, is a local to the area and got a peek at some major updates to the set. In her video, she shows how in this town they’ve added facades to some of the local shops and added signs to make them fit the world of Enchanted.

The most interesting thing about the shop signs are the names. They’re quite recognizable, so much so that we are wondering if this could mean more characters to come. Some of these shop names are “A Whole Food World”, Bibidi Bobidi Butchers, and Smee’s Cheese. With some of these shop names, we could possibly be expecting Aladdin and Jasmine, a Fairy Godmother, and maybe even Smee.

Related: Dempsey Arrives For ‘Disenchanted’ Filming – “This Place is Incredible”

No official word has been made if these characters will be joining the cast. And this could just be a fun way for the film creators to keep the world of Disenchanted still whimsical and fun! As production continues and more develops, we will keep you updated on everything Disenchanted!

What do you think of the new ‘Disenchanted’ set updates? Do you think more characters are on the way? Let us know in the comments!

Planning a trip to Andalasia — ok, or maybe just one of the Disney Parks? Let Academy Travel help with all of your vacati0n planning needs!