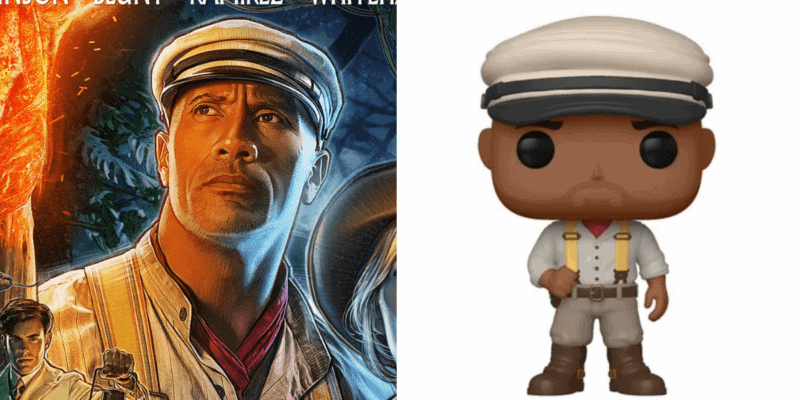 We’re excited that Disney’s Jungle Cruise is a little over a month away, and with new gear to celebrate the film, our exhilaration is palpable! With little to no merchandise hitting the shelves, POP! Funko’s new Jungle Cruise Frank POP! Vinyl Figure is a must-have for Jungle Cruise aficionados everywhere.

The only true collectible available (so far) for Disney’s Adventureland film, the POP! Vinyl Figure is about 4 inches tall and comes displayed in a classic Funko POP box. In stock at Entertainment Earth, Skipper Frank Wolff will retail for $10.99. The product description of the item details Frank further:

Everyone, turn around and wave goodbye to the folks back on the dock… they may never see you again… The famous Disney ride is moving to the big screen and adding The Rock! Step aboard for a wild ride! This Jungle Cruise Frank Pop! Vinyl Figure measures approximately 3 3/4-inches tall and comes packaged in a window display box.

Frank stands tall as a solitaire fully sculptured vinyl figure, complete with a classic bobblehead and now-iconic yellow suspenders. His red undershirt peers from under his five o clock shadow, and we can just hear him touring us around in La Quila, right past Switzer Falls.

You can also pick up a traditional Skipper in a World Famous Jungle Cruise boat POP! Funko in various shops and online outlets. It is truly a big collectible and will fill your heart with Adventure! The sale originally took place on shopDisney.com, but the item is still available to hunt and collect!

We know that the Jungle Cruise attractions in the Disney Parks will not take on any life from the upcoming films, but we know for sure that the Backside of Water will be flowing right into the movie. We’re also learning that Trader Sam might be a GIRL in the film ! That’s so exciting!

Dwayne Johnson himself leaked that Disney’s Jungle Cruise film is being released on July 30 th in theaters and Disney + Premier Access. Jungle Cruise Fans will be able to catch the film however they prefer to watch it, just make sure you stay in the boat!

Are you going to purchase this awesome Jungle Cruise POP figure? Leave us a comment below!

Comments Off on The Rock Gets Exclusive POP! Vinyl Ahead of Disney’s ‘Jungle Cruise’