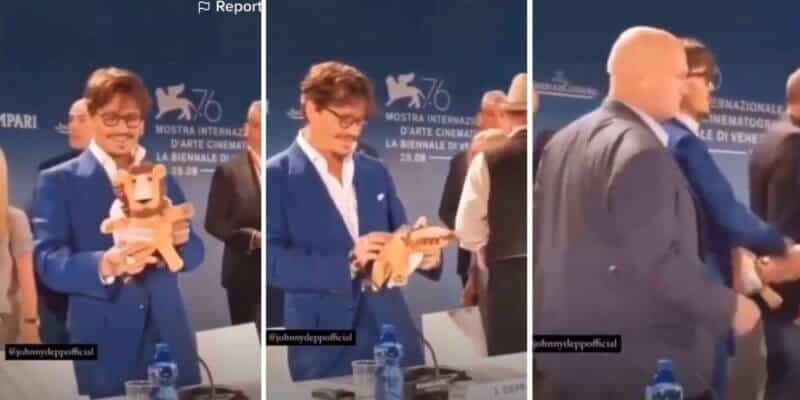 All images credit @isabellasign via TikTok

Johnny Depp is known for a lot of things, and loving stuffed animals is clearly one of them.

At the moment, Depp has been under the spotlight as he and his ex-wife Amber Heard continue their legal battle in which Heard is claiming domestic abuse for $100 million, and Depp is counter-claiming defamation for $50 million. The battle has caused Depp to lose major acting roles, such as his iconic Jack Sparrow in Disney’s Pirates of the Caribbean.

All of the negativity aside, however, it seems fans are still obsessed with old footage of Depp that went viral showcasing the actor acting very protective over a stuffed animal.

TikToker Izzy Evans (@isabellasign) showcased a clip of Depp in an interview panel where he was given a toy lion. When the actor receives the stuffed animal, his face lights up as if he were a little kid, and you can see that he does not let go of it during the entire panel.

Once Depp gets up to leave, a security guard tries to take the stuffed animal out of Depp’s hands for him, but Depp actively swats the hand away, as if he did not want anyone else touching his toy!

The TikTok has gone viral with over four million likes and thousands of comments discussing how adorable the video is. Some comments also match the Twitter hashtag #JusticeforJohnnyDepp, which has been trending on various occasions during the ongoing legal battle between Depp and Heard.

If there is one thing for certain, it is that throughout all of the ongoing drama surrounding Johnny Depp, his fans continue to remain loyal to him. As we can see from the success of the TikTok above, it seems that Depp’s charisma continues to have fans flocking to him, even with footage that is now years old!

What do you think of this hilarious TikTok and the ongoing Johnny Depp drama? Let us know your thoughts in the comments below!