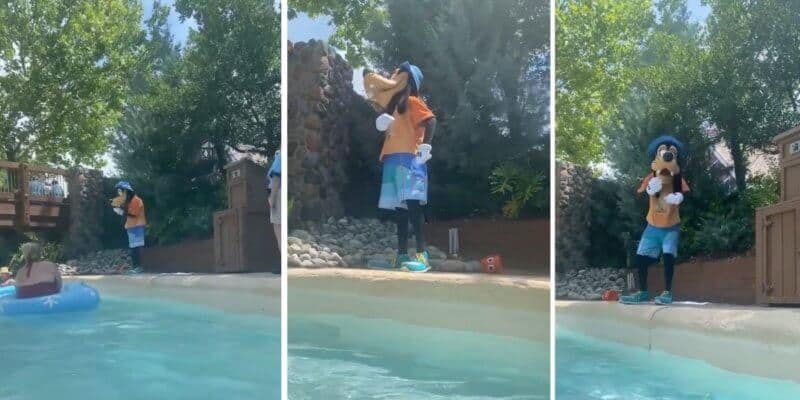 Although character meet and greets are currently unavailable at Disney World, Guests can see their favorite characters through interactions!

Guests stand at a distance from characters and can wave and interact with them and even take socially distanced selfies and photos! Typically, we see these interactions take place at Magic Kingdom, EPCOT, Disney’s Hollywood Studios, and Disney’s Animal Kingdom, but the other day, Blizzard Beach had Goofy wanting to jump in the lazy river.

When Guests go down the lazy river at Blizzard Beach, they may expect to see some theming and get a little wet, but it is an extraordinary occurrence to see a character interacting with you! Experiences such as this are truly unique and help create magical memories for Guests since it is not the typical character interaction spot, such as the train station in Magic Kingdom.

As Disney World begins to return to normal operation by removing social distancing and mask mandates for fully vaccinated Guests, many hope that character meets and greets also return soon. I would also like to see them return, but I hope that moments like this one continue!

What is your favorite character story at Disney World? Let us know in the comments below!