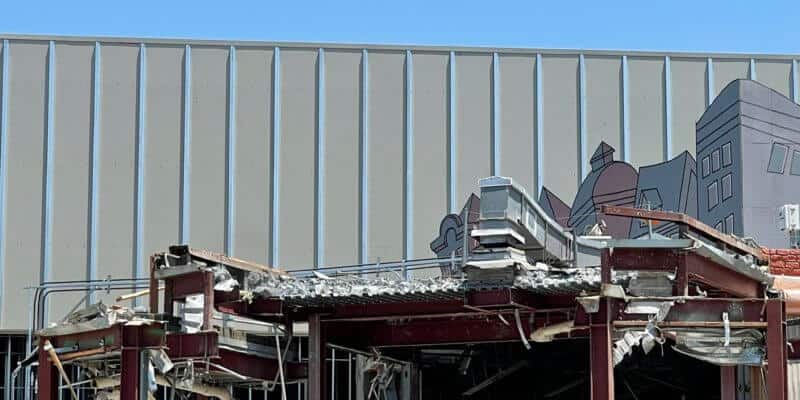 Walt Disney said that Disneyland would never be complete as long as there is imagination left in the world. Disneyland will change as times change, new technology is developed, and Guests’ interests change. With that being said, Disneyland Resort is currently moving full-steam ahead on the construction of its newest attraction, Mickey and Minnie’s Runaway Railway.

In order to make way for the new ride, which will be located in Mickey’s ToonTown, Disneyland must tear down some of what was once there. Enter the Gag Factory – ToonTown Five & Dime.

Just a few days ago, Disneyland Resort crews were seen tearing down the Gag Factory during park hours — which was surprising to Guests visiting the theme park, as construction like that is usually done after the Park closes or, if possible, in areas that aren’t visible to Guests. However, there are times when Disney Parks refurbishments and construction projects have to occur during Park hours and in areas visible to Guests.

Now, as we can see, most of the building has been completely torn down, and its sad frame is all that remains of the only merchandise location in Mickey’s ToonTown. Check out the photos of the building shared by travel blogger and theme park fan The Cali Bae/Five Fires (@thecalibae) below.

Mickey and Minnie’s Runaway Railway was first announced for Disneyland Park in 2019 and was originally scheduled to open in 2022. Unfortunately, the pandemic shutdown put construction completely on pause. The new ride is now not scheduled to open until 2023.

Here is some more information about the fun new ride, shared by Disney Parks Blog:

While Disneyland has removed the only shopping location in Mickey’s ToonTown, there will most likely be some sort of gift shop that will open when Runaway Railway does. It is important to note that Disney has not revealed any new merchandise location at this time.

Mickey and Minnie’s Runaway Railway will be a copy of the attraction that opened at Disney’s Hollywood Studios at the Walt Disney World Resort on March 4, 2020.

Are you excited for Mickey and Minnie’s Runaway Railway to come to Disneyland? Or do you wish they had kept the Gag Factory? Let us know in the comments!

CLICK HERE to book your Disney vacation with our friends at Academy Travel today!