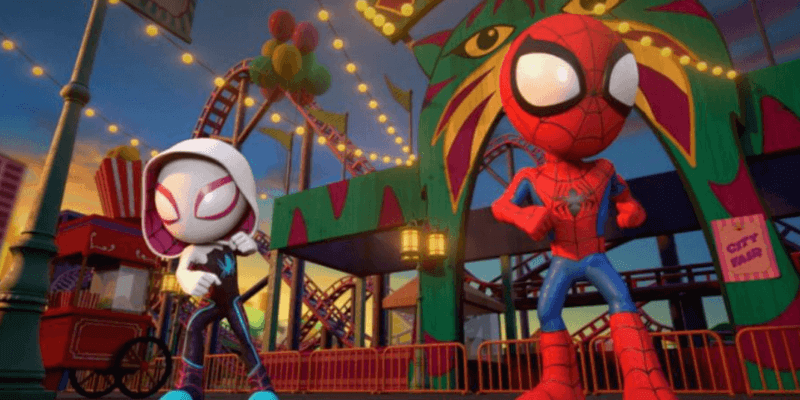 During the Marvel Animation & Family Entertainment panel at the 2019 D23 Expo, Disney Junior announced that Peter Parker, Miles Morales, and Gwen Stacy will team up with Hulk, Black Panther, and other super hero friends in Marvel’s Spidey and His Amazing Friends.

Now, fans are getting a first look at the upcoming Disney Junior series as well as learning more information about the theme song.

Entertainment Weekly gave fans a first look at the upcoming animated series, which will follow the adventures of Peter Parker, Miles Morales, and Gwen Stacy.

You can see some of the series’ characters in the preview images below.

But that’s not all, because Fall Out Boy frontman, Patrick Stump, also sat down with Entertainment Weekly to talk about the theme song for Marvel’s Spidey and His Amazing Friends and what challenges he faced when writing the song:

“I came in with decades of being a Marvel nerd. But I was like, well, this is probably going to be the first time a lot of kids in this generation are going to see an iteration of Spider-Man. What does that mean? There’s so much history behind that.

In my head, I was like, ‘Okay, you’ve got the ’60s Spidey cartoon, with its surf rock theme. You’ve got the ’90s cartoon, which has a little bit more of a metal, hard rock thing. Then there are the scores. There’s the Danny Elfman score, the Horner score, the Michael Giacchino score. All of those things were swirling around my head in like one minute, you know, and I just sat down and had this explosion of inspiration. Then I just had to scramble to get to the studio to lay it all down. I was so excited at that point.”

In addition to writing and singing the theme song, Fall Out Boy‘s Stump is also composing the score for Marvel’s Spidey and His Amazing Friends.

“I’ve been scoring for about five years. It’s my day job, but no one really knows about it. I’m the guy from Fall Out Boy and that’s usually what people think of me as, but I spend all day, every day scoring. I kind of assumed that they were going to like my theme song and then get someone that they prefer to score. But they offered me the chance to score a short demo reel kind of a thing, and they went for it and they hired me. It’s kind of the same feeling I had writing the theme song, where I’m coming to it with all this story and I get to write music for Black Panther and Ms. Marvel. It’s incredible, it’s the coolest thing.”

Marvel’s Spidey and His Amazing Friends will be the first full-length Marvel series for the Disney Junior audience and will premiere later this summer.

Are you excited to see Marvel’s Spidey and His Amazing Friends when it debuts? Let us know in the comments below.