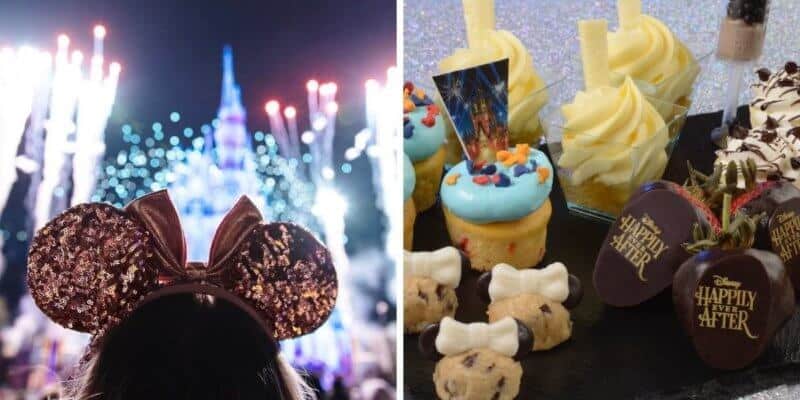 In case you missed it, Disney World announced that fireworks are returning to the theme parks on July 1. Happily Ever After and EPCOT Forever will both light up the night sky again starting next month, and even though Guests are excited about this news, many are wondering if dessert parties will also return.

Related: Happily Ever After and EPCOT Forever Show Times Announced

What are Fireworks Dessert Parties?

Fireworks dessert parties are an extra added fee to a Disney World vacation, but allow Guests to watch various nighttime spectaculars from a private dining area, all while indulging in delicious treats. Before the pandemic shutdown and subsequent phased reopening, one of the more popular fireworks dessert parties was the Fireworks Dessert Party at Tomorrowland Terrace, which Disney World describes as:

End your magical day with a celebration featuring delectable desserts and an enchanting fireworks extravaganza.

First, join us at Tomorrowland Terrace Restaurant, where a tempting array of freshly prepared desserts, seasonal fruits and flavorful cheeses awaits. The bountiful buffet may include such favorites as:

You can raise a glass of your favorite beverage to toast your day of theme park adventures—and the enchantment to come.

Guests ages 21 and over can also choose from a fine selection of beer and wine.

Please note that the menu items are subject to change and the fireworks experience may be changed or canceled without prior notice.

When Could Fireworks Dessert Parties Return?

Although Disney World has not yet announced when we will see the return of these special offerings, this Inside the Magic writer suspects it will be soon. Now that we know fireworks are returning come July 1 at Magic Kingdom and EPCOT, Disney World could start offering dessert parties again.

These fireworks dessert parties are already at a limited capacity as Disney only sells a select number of tickets at each event. Additionally, instead of offering the desserts in a buffet-style setting, Disney could instead plate the desserts individually on a platter and if Guests wanted to indulge in more, they could go back for a second or even third plate — Similar to how Disney has modified buffet-style dining options to family-style at select restaurants.

They could also take a cue from how Aulani, a Disney Resort and Spa, in Hawaii has modified their buffet dining experience.

Offering dessert parties would not only excite Guests as it is another step towards “normalcy”, but it would bring in more money for the theme parks, which could, in turn, allow them to bring back even more entertainment offerings in the near future.

Again, at this time Walt Disney World has not announced when they will bring back fireworks dessert parties. However, Inside the Magic will update you as we get information.

Do you hope to see fireworks dessert parties return soon? Let us know in the comments below.

If you want to visit Disney World on your next family vacation, be sure to start planing today!