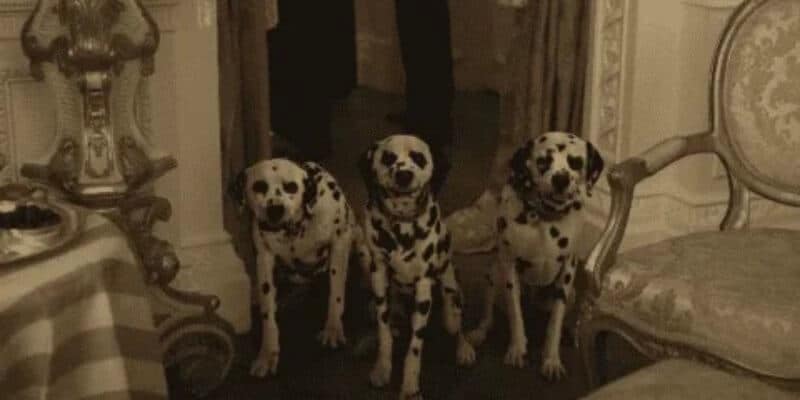 The latest Disney live-action film, Cruella, hit theaters and Disney+ on May 28 and has been a hot topic ever since.

Not only did it take the box office by storm, but everyone cannot stop talking about how both Emma Stone and Emma Thompson stole the show. Stone took on the role of the iconic Cruella De Vil while Thompson portrayed Baroness.

But aside from the two leading ladies, there are a few other characters that stole the show — Of course, we are talking about the Dalmatians!

There are some spoilers ahead — If you have not yet seen Cruella, please be warned.

There were three Dalmatians in the latest live-action film, all of whom belonged to Baroness. During the movie, Cruella steals the dogs to retrieve a necklace that one of the dogs swallowed during a heist that, well, didn’t go quite as planned.

It’s safe to say that throughout the movie, these pups grew on us and completely stole our hearts. But did you know that one of these adorable Dalmatians is actually from Orlando, Florida?

That’s right — Parker, who was rescued from a shelter in Missouri in 2017, plays one of three Dalmatians owned by The Baroness. Jennifer Mohr, Parker’s owner and an animal trainer with Birds & Animals Unlimited, told Orlando Sentinel:

“Parker was the one, from what I was told, that actually was used for most of the scenes because the stunt double didn’t work out. Parker was the one that made the cut, so to speak, and he did really well in all the behaviors that they had to rehearse for the movie.”

At first, Parker was a bit shy but as Mohr brought him out and he interacted with other dogs, he warmed up. One of the places Mohr took Parker was to Universal Studios, where they both actually work on the Animal Actors On Location! show. This helped Parker tremendously, especially once he was paired with one of the older and more confident rescues. By matching Parker with another dog, it helped him to break out of his shell as he picked up on the other dog’s behavior.

Now, Parker is a superstar pup as he gets everyone’s attention! “Everyone loved him, and he got lots of attention from crews,” Mohr told Orlando Sentinel. “It was really good for him. He started being on training a little bit behind the other days, but he learned everything fast, so caught up with them very quickly.”

And if Parker looks familiar, it’s because he is! Parker also played a role in the live-action Lady and the Tramp that hit Disney+ in 2019. He can be spotted in the pound scene, so keep those eyes peeled the next time you watch the film!

Did you know that one of the dalmatians was from Orlando, Florida? Let us know in the comments below.