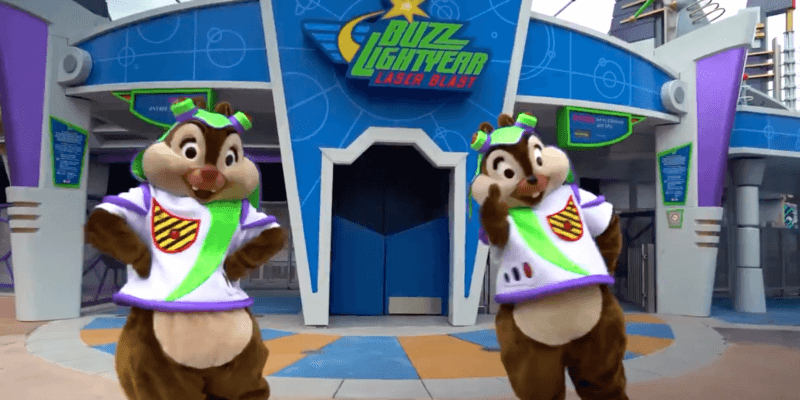 This is something Disney fans don’t often see (aside from in commercials) — Disney characters riding the rides!

We have reported on Mickey Mouse riding Dumbo the Flying Elephant with Guests in Shanghai Disney as well as Goofy riding the Fantasia Carousel, also at Shanghai Disneyland!

Now, the trouble maker duo — Chip and Dale — have put on their Discoveryland gear and decided to face off on Buzz Lightyear Laser Blast in Disneyland Paris!

DLP Report took to Twitter to share an adorable video of Chip and Dale riding Buzz Lightyear Laser Blast ahead of its reopening next week:

I personally love seeing when Disney characters ride the rides inside the theme parks — It is just so magical! It truly is like something right out of a Disney commercial.

Disneyland Paris describes this ride as:

Evil Emperor Zurg is stealing batteries from helpless toys to power a new weapon of destruction—and Buzz Lightyear needs your help! As a Junior Space Ranger, it’s up to you to manoeuvre an XP-40 space cruiser through the shadowy Gamma Quadrant and fire lasers from an onboard cannon to stop Zurg and score points.

Based on the Hit Movies

Buzz Lightyear Laser Blast is an exciting ride into space that continues the epic battle between Buzz Lightyear and Evil Emperor Zurg, as seen in the popular Disney•Pixar Toy Story film series.

Disneyland Paris reopens to the public on June 17. Guests are excited to get back into the magic of Disneyland Paris, with new and returning experiences — But keep in mind that Guests must abide by the new safety protocols. Before visiting the theme parks, be sure to visit the Disneyland Paris website and familiarize yourself with the health and safety rules.

Have you ever spotted a Disney character riding a ride? Let us know in the comments below.