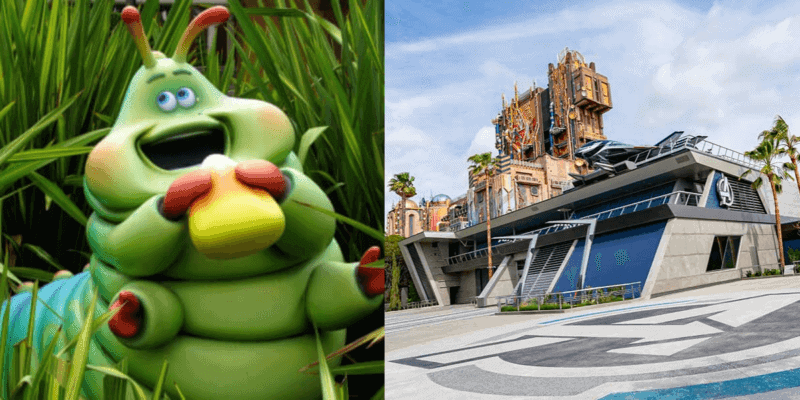 This was a super weekend for the Disneyland Resort as they welcome the all-new Avengers Campus! Although Disney fans are loving the new experiences and can also reminisce on the land that came before it.

Related: PHOTOS: Disney’s New Super Hero Land Is SO MUCH COOLER at Night!

Before Avengers Campus there was A Bug’s Land. This land was a fan favorite (especially among families and young children) since its opening in 2001. And even though fans of the A Bug’s Life-themed land were feeling mixed about the land closing 2018, many were receptive to a Marvel land to replace it.

With the delay of the land’s opening due to the ongoing pandemic, Avengers Campus finally celebrated its grand opening on June 4, 2021. The land features many homages and references to the Marvel Cinematic Universe. But, there are a few more Easter eggs for Guests to enjoy at Avengers Campus.

If you happen to snag a boarding group for the WEB Slingers attraction, you just might catch an Easter egg from It’s Tough to Be a Bug. If you look close enough, you could just catch a glimpse of the three-dimensional glasses used for this past experience. Thanks to a post by Disneyland Resort magic maker Philander (@PhilanderC85), we have a close-up look of where in the WEB Slingers queue you can find this not-so-hidden gem.

Tons of references exist that honor what came before Avengers Campus. Massive Xmas lights hanging over Pym’s Tasting Lab mimic the lights that hung during the holiday season in “A Bug’s Land”. In the Webslingers pre-show, a claw machine in the corner holds a pair of 3D glasses from the former resident, “It’s Tough to be a Bug”. At the test kitchen, a giant ketchup and mustard bottle reference the year DCA opened in 2001 and “Bountiful Valley Farms”, a former land adjacent to the Campus. My favorite of all though, a part from “Heimlich’s Chew Chew Train” inside of Webslingers.

Related: How to Earn High Score on WEB SLINGERS: A Spider-Man Adventure

One of these A Bug’s Land Easter eggs just happens to be in plain sight. Located at one of the edges of Avengers Campus, just past Dr. Strange’s Ancient Sanctum, is a tall yellow crane. This crane was actually used move Heimlich’s Chew Chew Train attraction vehicle on and off its ride track.

Additionally, there is another homage to the past land, but you might notice it better at nighttime. Surrounding the Pym Tasting Lab, you may see some familiar lighting.

These larger-than-life string lights that are similar to those of which would be strewn across A Bug’s Land.

There are tons of fun Easter eggs all over the new Avengers Campus and sometimes all you have to do is look up!

Have you seen these A Bug’s Land Easter eggs inside the new Avengers Campus? Let us know in the comments!

Looking to visit the Disneyland Resort’s Avengers Campus this summer? Let Academy Travel help you with all of your vacation planning!