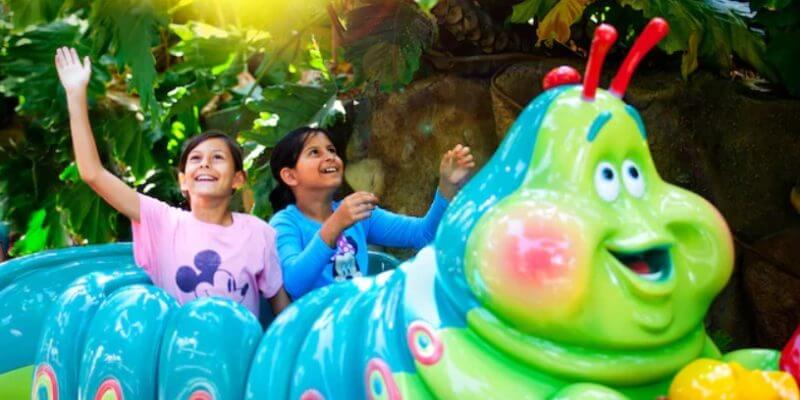 This summer is a bittersweet time for Pixar fans at Disneyland Resort: we’re gaining Pixar Pier, but we’re also losing A Bug’s Land, scheduled to close a few months from now to make room for Disney California Adventure‘s upcoming Marvel superhero-themed area. And perhaps the saddest fact of all is that we’ll have to say goodbye to Heimlich‘s Chew-Chew Train– the short but lovable kidding ride starring the German-accented caterpillar from Disney/Pixar’s “A Bug’s Life.”

The good news coming out of yesterday’s Pixar Pier media event, however, is that Heimlich’s Chew-Chew Train will live on via an audio tribute in the new Heimlich’s Candy Corn Toss boardwalk game.

“One of the characters we love is Heimlich, who’s adorable,” said Walt Disney Imagineer Jeffrey Shaver-Moskowitz. “We’ve announced that A Bug’s Land is going away, but we were like, ‘Heimlich needs a home.’ In our Heimlich game we’ve taken some of the lines from the attraction and put them into the gameplay, so Heimlich lives on.” 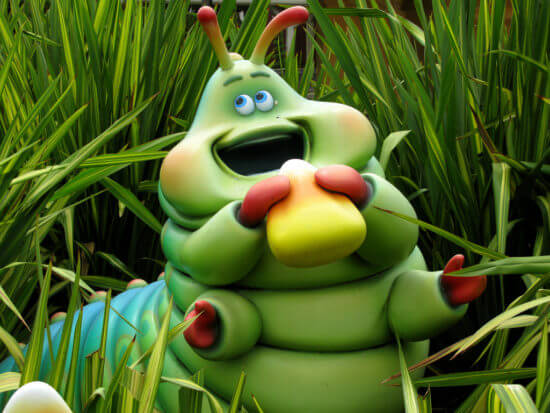 The reasoning for needing to preserve Heimlich’s voice from the Chew-Chew Train attraction is also a bit melancholy. Pixar’s theme park creative director Roger Gould explained, “The original voice actor Joe Ranft, who was head of story at Pixar for many years, a very beloved man, passed away, sadly. We really wanted to hear Joe’s voice continue, so we’re really happy that we’re taking his Heimlich recordings from A Bug’s Land and bringing them to Heimlich’s Candy Corn Toss.”

Gould then approximated Ranft’s Heimlich voice in paraphrasing, “He loves the candy corn!”