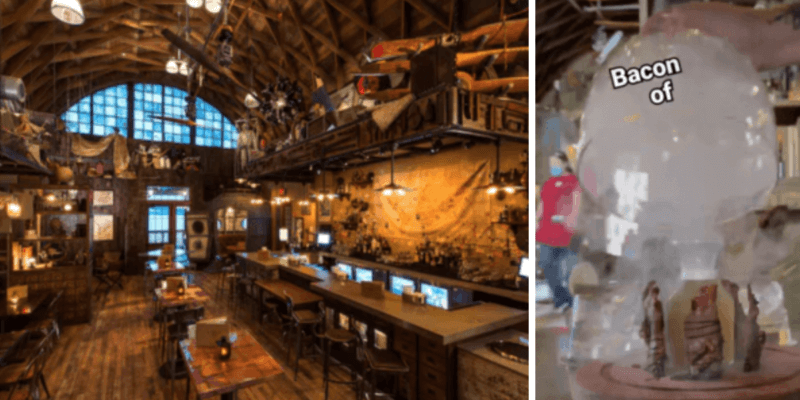 Both Images Credit to Disney

Jock Lindsey’s Hangar Bar at Disney Springs at Walt Disney World Resort is one of my favorite places to eat and drink.

The Indiana Jones-themed bar and lounge has offered the incredible Temple of Bacon on its menu. Now, Jock Lindsey’s Hangar Bar kicked things up a notch and introduced the Bacon of DOOM!

Related: What Restaurant Is the Most Booked at Disney Springs?

Disney Parks took to its official TikTok to share a closer look at the new Bacon of Doom dish!

The Bacon of Doom one-ups its little sister, Temple of Bacon, by adding a drink, making this treat the full meal deal.

If we take a look at the menu, you can see that both dishes include thick-cut Applewood-smoked bacon that is dipped in milk chocolate and chipotle ganache from The Ganachery. Personally, I have had the opportunity to try the Temple of Bacon and I loved it,  so I am sure I would enjoy the Bacon of Doom!

The Bacon of Doom offers you two different drink options with your bacon, the Trusty Revolver, or the Snake Bite Margarita! It is enough alcohol for two to share, which is perfect since the bacon is a generous portion, which makes it perfect to share.

We love Jock Lindsey’s Hanger Bar as it transports Guests into the world of Indiana Jones! Did you ever wonder how the Hanger Bar came to be? Here is the official story from Disney:

The two globetrotters stumbled on Disney Springs in 1938 while chasing down a mythology-based tip in central Florida. Attracted to the town’s natural springs and lush terrain, Jock bought some waterfront property and eventually settled down, piloting seaplane tours across the fast-growing Sunshine State.

Jock eventually built an airplane hangar, air tower and runway, and invited fellow members of The Society of Explorers and Adventurers to pay him a visit. His home base soon became a popular stopover and watering hole for world travelers and locals alike.

Today, thrill-seeking families cross borders and continents to soak up the rugged charm of this artifact-strewn hangar bar, with its spare airplane parts, salvaged equipment and dusty mementos of glory days gone by.

Related: The Most Instagram-Worthy Photo Spots at Disney Springs in 2021

The Bacon of Doom is not the only Instagram-worthy treat you can find at Disney Springs. I highly recommended Gideon’s Bakehouse for a half-pound cookie that not only tastes delicious but is perfect for your Insta.

Will you be heading to Jock Lindsey’s Hangar Bar to try out the Bacon of Doom? Let us know in the comments!
Want to book a dream vacation to Walt Disney World? We can help — click here for more information.

Comments Off on Bacon of DOOM Is a Real Menu Item at Disney World, and You Need It!