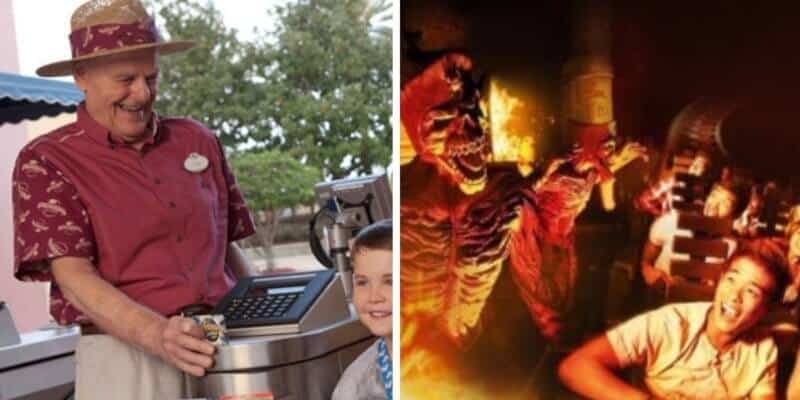 Universal Team Members always have excellent customer service, giving Guests memorable moments when they visit Universal Studios Florida, Universal’s Islands of Adventure, Volcano Bay, and CityWalk. Lately, it seems that they are really immersing Guests in the stories that each theme park holds.

We recently reported on a Team Member from security getting very into character and warning us that we should not be eating bananas before we enter the park, as a little boy did that recently and apparently ended up being licked by minions! The performance of the story was hilarious, and it had everyone around laughing and excited to see Minion Mayhem when we entered Universal Studios.

We were in luck once again when a Team Member working at the entrance of Islands of Adventure brought us into the world of the mummy. When Guests enter any Universal park, you must scan your entry ticket, whether that be a day pass or Annual Pass, and then do a finger scan.

I approached the Team Member who scanned my Annual Pass and was about to scan my finger when he screamed, “Wait!” The sheer intensity in his voice had me taken aback, and a little shocked. Then, the Team Member continued to tell me that there was a mummy on the loose sucking souls, and if I placed my finger on that scanner, that the mummy would steal my soul.

Knowing he was joking around, I told the Team Member that I would risk it so I could enter the park and ride VelociCoaster, and as I placed my finger down, he covered his eyes in a panic. Of course, no soul-sucking was done, and the Team Member laughed with me as I entered the park. Considering I was the only Guest entering as the park was near closing time, it seemed that the Team Member knew he could take a few extra seconds with me to make my short but sweet park day even better!

Next door, Universal Studios has an attraction themed to The Mummy called Revenge of the Mummy, and as a Universal fan, I recognized the IP he was referring to right away. Riding the fantastic attractions like Jurassic World VelociCoaster are huge highlights of any Guest’s day; however, these small interactions create a unique and immersive experience that leaves me as a Guest excited to return to the park and interact with more Team Members.

Hilariously, Universal Studios Hollywood just Tweeted a Mummy reference, and it seems that even with Team Member warning, Imhotep is getting all the souls he needs!

Imhotep got 99 problems but a soul ain’t one.

Imhotep got 99 problems but a soul ain't one.

What is a memory you have with a Team Member at Universal Orlando Resort?