Is There a REAL Human Skull in the Pirates of the Caribbean Ride? - Inside the Magic 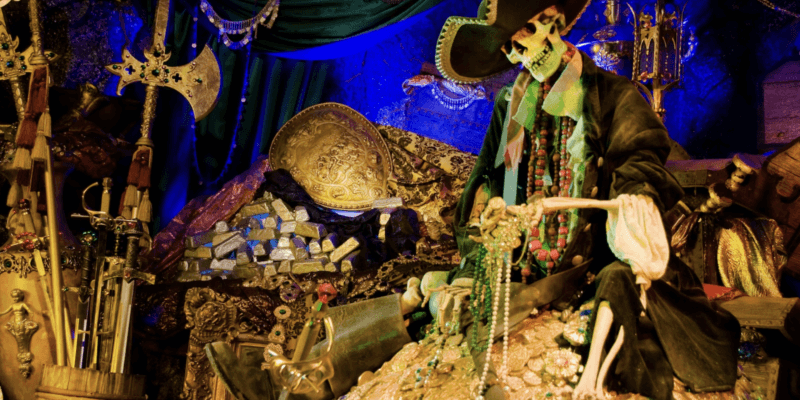 Is it an urban legend, or totally real? In the past, it’s been confirmed that there were real human remains inside Disneyland’s Pirates of the Caribbean attraction. And, if you know exactly where to look, you’ll see what is believed to be a true human skull inside the ride, and places where others once stood. Let’s take a look at the strange and bizarre medical history behind this classic Disney attraction…

Real Skull in Pirates of the Caribbean

With over 50 years of carrying riders through the Golden Age of Piracy, Pirates of the Caribbean is a Disneyland Park staple. One of the most immersive attractions created for the park, Walt Disney himself was involved in the attraction’s conception and creation. Originally, he wanted a wax museum type of walk-through, but seeing how popular the Carousel of Progress was in 1964, drove his Imagineers toward his audio-animatronic technology to create the ride we know today.

The ride opened to Disneyland Guests in 1967 and gathered rave reviews. Despite the ride’s updates and changes, it’s continued to be a top attraction at the park, inspiring over five films, merchandise collections, and characters in the parks.

When you visit Disneyland Park and board your vessel, you’ll enjoy many scenes during your ride. But there’s one scene involving skeletons where real human remains are subtly featured.

Originally, many of the Disneyland pirate skeletons were reportedly real. Donated from UCLA, the skeletons appeared more real (because they were) than the ones that could be sculpted in the art shop. Faux skeletons of the 1950s and 1960s were “too unconvincing,” said Disney Producer Jason Surell in a Magic Kingdom book entitled Pirates of the Caribbean: From the Magic Kingdom to the Movies. But over time, Imagineer’s ability to sculpt and render more realistic bones coupled with the need for maintenance repairs (and possible decay) resulted in the removal of the skeletons. Proper burials were reportedly given each time a skeleton was removed from the ride.

But at least one skull remains.

Inside the Captain’s Quarters treasure room, a dead man (who tells no tales) rests in his bed, examining a map with a magnifying glass. Your focus will be on him, in his striped nightcap and focused lighting. But if you gaze behind him to his bed headboard, you’ll see a slightly larger, darker (in color) and more dimly lit skull with a set of crossbones below the chin. Back in 2014, Disney Cast Member has actually confirmed this is the last remaining real skull.

This bedroom skull was once part of a whole skeleton donated by the cadaver labs at UCLA (University of California, Los Angeles).  There are plenty of rumors for whom this skull belongs, but as far as we know, none of them are verified. The “sources” include criminals, one that donated their body to science, an Imagineer who worked on the ride, and more.

The one real skull still active in the Pirate of the Caribbean. Can you remember the time when they were all real? from Disneyland

In the screenshot from our full ride through video below, you can see the reportedly real skull on the headboard.

Watch our ride through on YouTube for a full POV at Disneyland. You can see the full potential for stationary, real skeleton inclusion.

The Cartoons to Castles podcast also recently shared that, rumor has it, three real skulls remain on the attraction:

Is the headboard skull real or fake? At first Disney used skeletons from UCLA’s medical department, but were returned and replaced w/ Imagineered ones. Rumor has it 3 real ones remain, including the headboard skull. What have you heard about Pirates of the Caribbean skeletons?

Is the headboard skull real or fake??At first Disney used skeletons from UCLA’s medical department, but were returned and replaced w/ Imagineered ones. Rumor has it 3 real ones remain, including the headboard skull. What have you heard about Pirates of the Caribbean skeletons? pic.twitter.com/kxdDXixVub

It’s been a long time story that the East Coast’s Pirates of the Caribbean attraction in Magic Kingdom is haunted by George the Ghost (yes, this is a real thing!). While we’re not sure if other Pirates rides around the world have similar issues, we love these little stories about irregularities inside the U.S. rides.

Some Disney aficionados aren’t too sure about the skull still being real, as so many Imagineers and Cast Members have helped maintain the ride over time. This Reddit thread has a few naysayers as far as the legitimacy of the skull (still) being real. Will we ever know for sure?

The description for the fan-favorite attraction on the Disneyland website reads,

Keep a spry eye out for sly Captain Jack Sparrow from the Pirates of the Caribbean film series, as he schemes to get his hands on the spoils. If ye be seekin’ adventure, ay—you’ve come to the proper place.

Did you know about the skull in Pirates of the Caribbean? Leave us a comment about this crazy but true story!

Comments Off on Is There a REAL Human Skull in the Pirates of the Caribbean Ride?