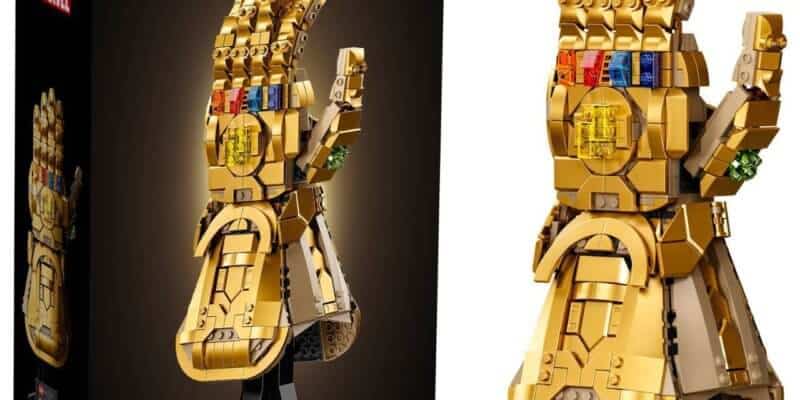 You’d think that a LEGO Marvel Infinity Gauntlet would have been the first thing that Marvel would have wanted to sell after Avengers: Endgame. And yet, it’s taken two years for a LEGO Infinity Gauntlet to come to fruition. But fans can now piece together their own gauntlet to execute Thanos’s snap — whether they want to erase half the population or save the world.

The 590 piece set — which, when built, stands 12.5 inches tall — comes complete with Infinity Stones, a display stand, and a descriptive placard. And yes, the fingers are moveable, for maximum “snappage.” The official description from the LEGO site lists the product as the following:

“A challenging construction project that rewards the builder with an impressive display piece that perfectly evokes Marvel’s captivating style. This LEGO brick recreation of the iconic Infinity Gauntlet featured in the Marvel Studios’ Avengers: Infinity War and Avengers: Endgame movies is certain to attract attention and interest wherever it is displayed. With movable fingers, vibrantly colored Infinity Stones and a descriptive tablet attached to a sturdy base, this golden gauntlet provides an engrossing construction challenge and a finished model that will captivate all who see it.”

The LEGO Infinity Gauntlet retails for $69.99, which is actually on the cheaper end when it comes to some of the prop replicas that are out there, like the Hasbro Captain America shield. Currently, it’s available for pre-order at the LEGO Store, but you can also pre-order it from Walmart, Best Buy, Target, and Amazon before it releases on August 1.

As fans might be able to tell, the LEGO Infinity Gauntlet is more of a display item than a toy. It joins the latest additions in LEGO “adult display sets” that include a Darth Vader helmet, an Imperial Probe Droid, and a Scout Trooper Helmet. And if you’re looking for another way to show your love but aren’t a fan of putting together LEGOs? There’s always Marvel Legend’s new Iron Man Nano Gauntlet Articulated Electronic Fist, which stands 18 inches tall and also includes flexible fingers, the Infinity Stones, and lights. And it’ll look great standing next to the LEGO Gauntlet…we’re just saying.

Which gauntlet do you want to wield? Let us know in the comments!