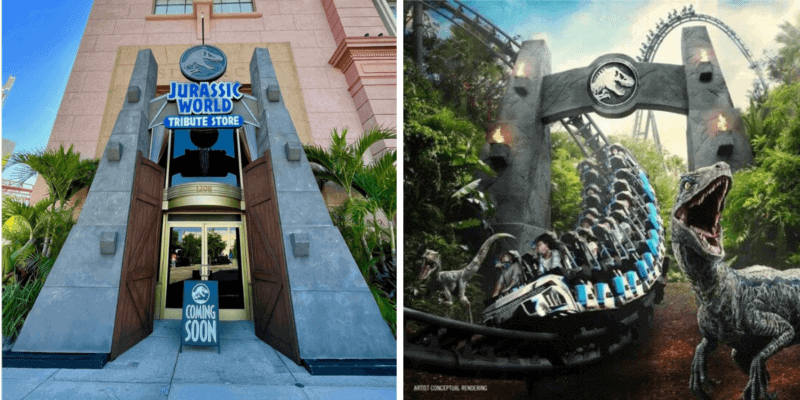 Both Images Credit to Universal

While the VelociCoaster will be opening at Universal’s Islands of Adventure on June 10, Universal Studios Florida will be home to the Jurassic World tribute store which is set to open soon!

“What have they got in there, King Kong?”

There is no opening date for this tribute store yet, Universal simply says it is “coming soon”.

Right now we are not certain how many rooms will be open inside of the Jurassic World tribute store but we do anticipate loads of merchandise and dinosaurs to be lurking inside. Hopefully, we will also see dinosaur-themed treats as well.

The tribute stores that Universal creates are always popular with fans. Depending on when you visit the Universal Orlando Resort you may see a tribute store for Halloween Horror nights or Mardi Gras. Last year Universal even built the first tribute store for the Holiday season! Now Universal is once again expanding on this popular shopping experience with Jurassic World.

The VelociCoaster is just a month away from its grand opening on June 10. The coaster is going through rigorous technical rehearsals to ensure it is perfect for opening day. Both Team Members and Universal Annual Pass Members have been able to ride the VelociCoaster.

The VelociCoaster has begun soft openings for park Guests as part of the technical rehearsals for the attraction. These soft openings have long wait times and are not guaranteed to be running when you visit Universal’s Islands of Adventure, so be sure and check your Universal app for the most up-to-date information when you visit.

Currently, Universal’s Islands of Adventure, Universal Studios Florida, Volcano Bay, and CityWalk are all open for Guests. You do not need an online reservation in order to enter the theme parks just a valid theme park admission ticket.

Are you excited to see the new Jurassic World tribute store when it opens? Let us know in the comments!

Want to book a Universal Orlando Resort vacation? We can help — Click here for more information.