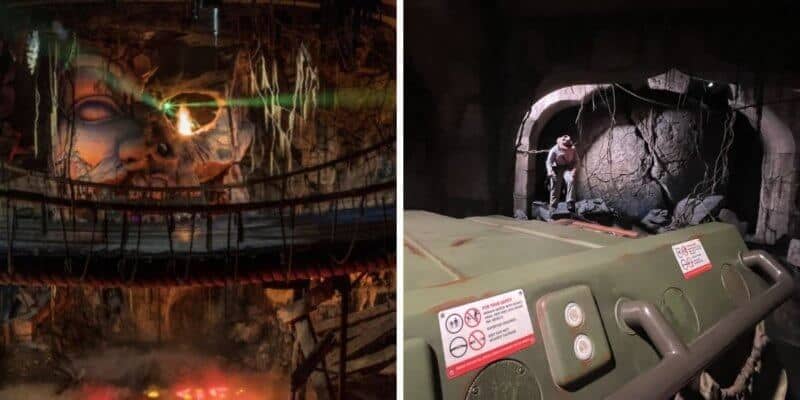 One fan-favorite Disneyland attraction — Indiana Jones Adventure — experienced some technical difficulties, leaving Guests stuck on the ride for a decent amount of time this afternoon.

At approximately 3 p.m. local time, our Editor-in-Chief was riding Indiana Jones Adventure at Disneyland Park. She stated they practically finished riding the entire attraction but got stuck for approximately 15 minutes right before they approached the platform to exit the ride vehicle. A Cast Member informed Guests over the loudspeaker to hang tight and it will be a little while before they are able to exit the ride.

In the photos below, you can see exactly where our Inside the Magic team got stuck while aboard the ride.

Luckily, Guests were not evacuated from the ride and after 15 minutes, it proceeded as normal. Once Guests disembarked the ride vehicles, they were handed passes so that they can ride the attraction again later on in the day if they wish. In fact, the ride seemed to be working normally as soon as our ITM staff got off of the ride, so everyone who got off of the ride can now immediately get back on.

If you are familiar with the attraction, you probably know that Indiana Jones Adventure tends to have its issues and actually closes down due to maintenance quite often. In fact, our ITM team said this was not the first time it experienced technical difficulties today and it even broke down on Disneyland’s reopening day at the end of April. It seems as though this incident is just another one of those unfortunate mishaps where the ride malfunctions and Guests got stuck while on the ride.

Also please keep in mind that if you are visiting the theme parks be sure to check the Disneyland app for the most up-to-date information regarding wait times and attraction information.

In case you missed it, Indiana Jones Adventure has begun a virtual queue system, which is similar to how Rise of the Resistance operates. According to the Disneyland website, the attraction is described as:

Have you ever been stuck on Indiana Jones Adventure? Let us know in the comments below.