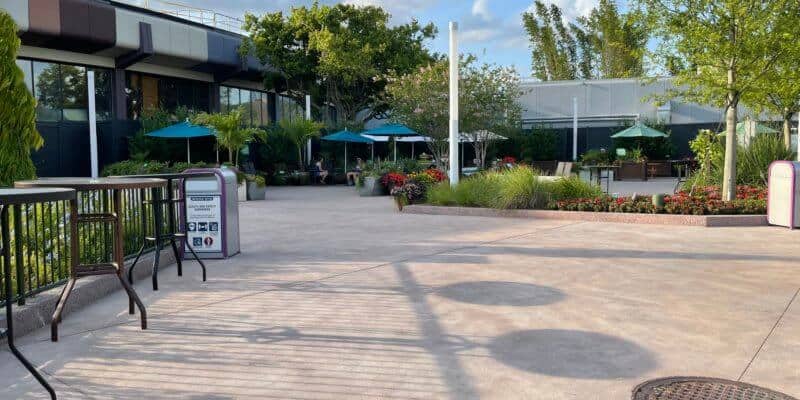 As Disney World heads towards a more “normal” form of operations, some of the protocols originally set out for the health and safety of Guests and Cast Members are slowly beginning to be removed.

Most recently, we have seen lots of changes at Disney World. Temperature checks have been removed, physical distancing is being reduced from six feet to three feet, and now, Guests can remove their masks while outdoors. With the removal of outdoor mask wear, relaxation stations around Magic Kingdom, EPCOT, Disney’s Animal Kingdom, and Disney’s Hollywood Studio are not as necessary.

Previously, relaxation stations were meant to give Guests the opportunity to remove their mask in a controlled area. Anyone entering the area was made aware through signage that masks were optional in the area. However, considering all outdoor spaces are now, theoretically, “relaxation” stations, designated areas are no longer needed to be labelled as such.

Below, you can take a look at an area in EPCOT that once had signage dedicating the spot as a relaxation station, and now, it looks like a regular open area in the park.

Although this may not seem like a huge deal, it does allow the theme parks to look more “normal” as sections are no longer blocked off, or used for a specific purpose. Considering some of these stations, like the one at Hollywood Studios which was held in the Indiana Jones Stunt Spectacular theater, took up entertainment space — perhaps the removal of relaxation stations could allow for the space to be used for its original purpose in the future! That being said, this is all speculation at this point.

Most recently, Disney CEO Bob Chapek announced that park operations would be returning to normal as soon as safely possible, which will include raising capacity. That being said, it is clear that as time goes on, we will start to see a lot more of these changes return the parks to a more recognizable theme park experience.

Do you like seeing Disney World revert to a more normal theme park operation? Or do you think that Disney is moving too fast?