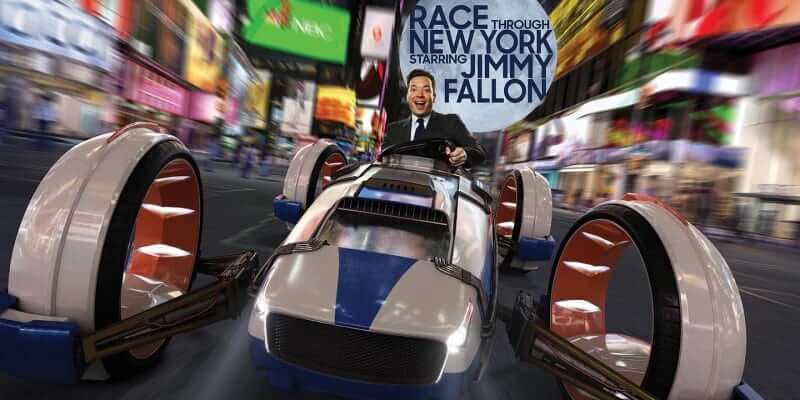 One of Universal Studios’ newer attractions, Race Through New York Starring Jimmy Fallon, allows Guests to experience a VR-like race through the big apple against late-night talk show host Jimmy Fallon. Although it may not be the most popular ride in the park, it is a fun attraction that many Guests can enjoy, and, if you are a fan of The Tonight Show, the queue will have you really excited!

However, it seems that there is some contention over the attraction which was built in 2017. According to the Orlando Sentinel, this attraction has been undergoing a behind-the-scenes battle for years with the attraction’s original manufacturer over five million dollars that Universal still allegedly owes, as per the new lawsuit filed.

The Orlando Sentinel reports that during the construction of the attraction Universal wanted some changes to be made to the ride, when an agreement of these changes between Universal and DyMoRides could not be met, it ended with DyMoRides eventually being replaced. They state that:

DyMoRides sued Universal in Orange Circuit Court, saying it was still owed $5 million in unpaid bills with interest. The Austrian company also claimed Universal is operating the ride today without a license to use DyMoRides’ intellectual property. The lawsuit seeks unspecified damages.

Considering the final total owed to DyMoRides was alleged $10.8 million, this claim would indicate that Universal has yet to pay for around 50% of the work that they contracted DyMoRides for.

It seems that mediation was hosted for the two company’s on March 17, but the two could not come to a settlement, and on March 27, Dynamic Motion Rides moved forward in the legal case to sue Universal Orlando for their alleged inability to pay the bills for their contracted work.

Orlando Sentinel brought up a story that Inside the Magic has also reported on which involved a Guest’s lawsuit against Universal after undergoing a severe injury at Volcano Bay. During that court ruling, it was made known that the water slides developer, ProSlide Technology, was owed more than $1 million for their work.

In theme parks, we know that these things happen, and we hope that a just and right outcome is found. This is all alleged until the court decides a verdict or both parties can reach a settlement.

Universal will surely want to clear this up as they are getting ready to construct a brand-new theme park, Epic Universe.

According to the Universal site Race Through New York Starring Jimmy Fallon is described as:

Take The Show For A Ride
Use our Virtual Line™ experience and get your return time to be a guest at The Tonight Show! Experience the history and fun of The Tonight Show in Studio 6B. Send a “Thank You Note” at the interactive desks. See Hashtag the Panda and enjoy a hip-hop barbershop performance by the Ragtime Gals!

Then, join Jimmy Fallon and all your favorite characters from The Tonight Show in a fun-filled race through, below and above New York City.

Stay tuned to Inside the Magic as we continue to follow this lawsuit against Universal Orlando.

What do you think of this new claim against Universal?