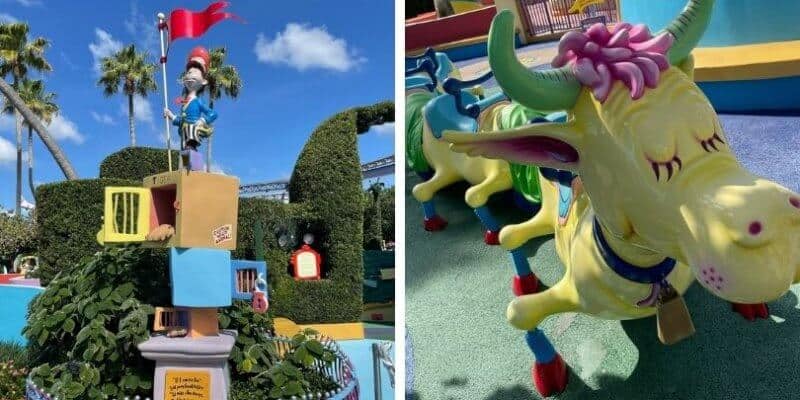 Universal Orlando Resort has been operating most of its lands and attractions during the pandemic, giving Guests a close-to-normal theme park experience. However, there have been some sections that remained closed.

A lot of children’s play areas at both Universal Studios Florida and Universal’s Islands of Adventure have remained closed because they are high-touch areas, but slowly, many are beginning to reopen. Camp Jurassic recently reopened for Guests to enjoy, however, Fievel’s Playland remains closed.

Related: List of Attractions Unavailable in May at Universal Orlando

Now, the If I ran the Zoo playground in Seuss Landing at Islands of Adventure is also reopening, as noted by Inside Universal (@insideuniversal):

If I Ran the Zoo playground has reopened in Seuss Landing.
@UniversalORL

If I Ran the Zoo playground has reopened in Seuss Landing. @UniversalORL pic.twitter.com/Nu67c3pvxz

The interesting thing about this play area reopening is not so much that it is a high-touch play section for kids, but more so because of its theme and location within Seuss Landing. Universal recently announced that they were going to be “evaluating our in-park experiences” in regard to Seuss Landing since a variety of books (including If I Ran the Zoo) are no longer being sold or published due to “hurtful and wrong” portrayals.

Dr. Seuss Enterprises issued the following statement on certain books that they have stopped publishing and selling:

To that end, Dr. Seuss Enterprises, working with a panel of experts, including educators, reviewed our catalog of titles and made the decision last year to cease publication and licensing of the following titles:  And to Think That I Saw It on Mulberry Street, If I Ran the Zoo, McElligot’s Pool, On Beyond Zebra!, Scrambled Eggs Super!, and The Cat’s Quizzer.  These books portray people in ways that are hurtful and wrong.

Ceasing sales of these books is only part of our commitment and our broader plan to ensure Dr. Seuss Enterprises’s catalog represents and supports all communities and families.

When this was announced, reporter Ashley Carter (@AshleyLCarter1) reached out to Universal who shared the following:

Seuss Landing in Universal’s Islands of Adventure features a play area themed after If I Ran the Zoo, one of the Dr. Seuss books that will no longer be published. I reached out to Universal Orlando about whether that decision would impact this area. Universal sent this statement:

“Seuss Landing Continues to be very popular with our guests and we value our relationship with Seuss Enterprises. We’ve removed the books from out shelves as they have asked as we’ll be evaluating our in-park experience too. But out guests can plan on continuing to be able to enjoy their favorite experiences at Seuss Landing.”

Seuss Landing in Universal's Islands of Adventure features a play area themed after If I Ran the Zoo, one of the Dr. Seuss books that will no longer be published. I reached out to Universal Orlando about whether that decision would impact this area. Universal sent this statement: pic.twitter.com/unzNHgUuwE

The book If I Ran the Zoo, is one of the books that was canceled from publication due to imagery and portrayals within the book, so, interestingly, Universal has decided to reopen the play area. From this, it seems that Seuss Landing is not going anywhere anytime soon as some of its offerings continue to be reopened to the themed area of the park. However, if Universal is continuing to evaluate the experiences in Seuss Landing, then perhaps we could see changes in the future.

Over at Disney World, we have seen a lot of attractions announced to be rethemed or reimagined as Disney strives to become more inclusive. For example, Splash Mountain will be rethemed to The Princess and the Frog, and some scenes of Jungle Cruise will be reimagined.

Do you think Universal needs to replace Seuss Landing, or should this area stay the same? If they did, what would you like to see take its place?