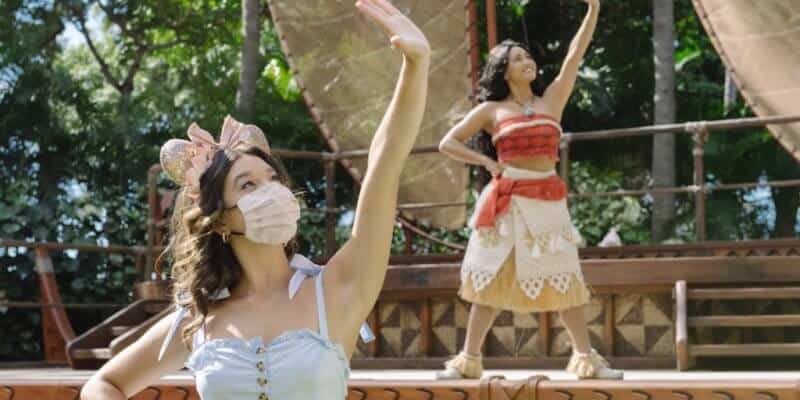 After a long and hard day at work, what do you do to relieve some stress? Well, if you’re in Hawaii and nearby Aulani, a Disney Resort and Spa, you may be able to spot Peyton Elizabeth Lee living her best Aulani life with our favorite Disney characters and taking some much-needed time off while filming her upcoming Disney+ original series.

Set in modern-day Hawai‘i, the 10-episode comedy follows Lahela “Doogie” Kamealoha, a 16-year-old prodigy juggling a budding medical career and life as a teenager. Guiding Lahela (and also complicating things) is her family, including her spit-fire mother who’s also her supervisor at the hospital, and her “Local Boy” father struggling to accept that his daughter is no longer his little girl.

Peyton Elizabath Lee was also seen on Disney Aulani Resort and Spa official Instagram’s page, showing off a gorgeous surfboard featuring Aulani’s official logo. In the photo, the view of Aulani is spectacular with the Ko’Olina lagoon and beach serving as the perfect backdrop. Disney Aulani shared:

A post shared by Aulani, A Disney Resort & Spa (@disneyaulani)

Scroll through the images to see Lee’s amazing day at Aulani with Mickey and Minnie, our fearless wayfinder Moana, and Stitch!

Be sure to stay tuned to Doogie Kamealoha M.D. coming soon to Disney Plus.

Have you visited Aulani, a Disney Resort and Spa yet? Let us know in the comments below!

Do you need help planning your Aulani adventure soon? Our friends at Academy Travel can help! Click the link for more information!